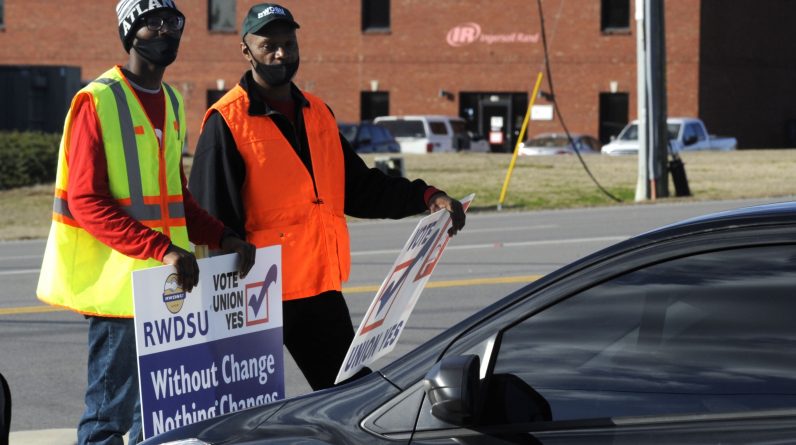 Nearly 5,900 workers were called by post at the end of March to elect the union. It did not win with 1,798 votes against 738 votes. A mixed statement.

TV5MONDE: Even if the election ends in defeat, can we see a victory in the fact that the vote to form a union has been organized within a company like Amazon?

Donna Kesselman : After all, here, the “struggle for the fifteen” (Editor’s note: The American Trade Union Service Union (SEIU) campaign is an expression of the profound turn for a trade union renewal since 2012. Workers in fast food restaurants and supermarkets are paid $ 15 an hour (12.60 Euros) and trade union rights) can be compensated, and this is when Kovit faced a health crisis. The first factory to strike against a lack of respect for health conditions was an Amazon factory in New York.

TV5MONDE: How complicated is it to form a union in the United States?

Donna Kesselman: American trade union law establishes two stages in the process of unionization. There is a first procedure that must be enforced first “To win” The right to organize a trade union referendum. For this, 30% of employees must sign a corporate request. If we win, the National Institute for Managing Industrial Relations (National Labor Relations Board) will hold a second referendum (Editor’s note: as ended on March 29 in Bessemer for Amazon).

It is an expression of a profound turn towards union renewal.

Between the moment it is decided and the vote of the workers, the employer has every right to express himself. He can organize forced meetings, campaign anti-union advisers, and even threaten dismissal.

Amazon spent $ 10,000 a day for a company that specializes Anti-union Prevents workers, for example by putting up posters up to the toilet. Management is also a planned “Ballot box” Inside the factory, before it was removed, it provoked the most fearful workers that the employer would be notified of the vote. Management also went on to set up a website denouncing the union for charging arrears.

If the current union is approved by a majority, it represents a collective bargaining chip. However, nothing compels the company to conclude these negotiations. Less than 50% of union campaigns result in a signed agreement. In addition, Alabama is one of the 27 “right to work” states where the right to regulate is still restricted, and it is one of the southernmost “Union Desert”.

TV5MONDE: Why does Amazon oppose forming a union? What is multinational fear?

Donna Kesselman: American employers have traditionally been hostile to trade unionism. The majority of companies call for “union break-up” (in French: Cos Syndicale) during the referendum. This tradition is particularly prevalent in mass distribution, especially on Amazon and its biggest competitor, Walmart. Companies in Silicon Valley and the new digital economy have succeeded in renewing this tradition in a new form, especially at VTC companies such as Uber and Lift, which have declared that their economic model is inconsistent with pay, and therefore the unions that protect it.

Most US companies call “union break-up” (French: Cos Syndicale) during the referendum

Paradoxically, at Amazon, there are many employees because managing turnover is very difficult and expensive. One of Amazon’s key arguments during the campaign was that in addition to providing health insurance, the company also paid its employees a double minimum federal wage ($ 7.25 / hour), which was $ 15 per hour (60 12.60). But what we have forgotten to say is that this level of pay came from a trade union struggle, that is, “fight for $ 15”. What Amazon fears is that if a union is formed, it will be able to revise that wage upwards.

In addition, the most problematic material trying conditions on Amazon today are: days lasting 10 days with two 15-minute breaks to go to the bathroom. To avoid getting angry, or because the toilets are too far away, some staff go to the extent of urinating in bottles. The pace of work is also unbearable because it is subject to mechanisms that impose a rhythm. If there is a recession, fines will be imposed on wages.

Donna Kesselman: Historically, Alabama has been an exceptional state in the south and has strong inter-ethnic trade union traditions, thanks to the highly militant miners of the 1930s and 1940s. The issue of inter-ethnic wrestling is high in Bessemer, especially as more than 80% of Amazon employees are African-American. The Black Lives Matter movement also helped greatly in wrestling. There was real popular support across the country, politicians (Editor’s note: Bernie Sanders went there on a voting day) and even NFL footballers. Bessemer accumulates all this: it is a city in the south that can create a trade union renaissance, and it is inter-ethnic.

TV5MONDE: How to explain the failure of the walk?

Donna Kesselman: Beyond the code, nothing changes the work in the field. According to experts in the file, there were two major mistakes. The first is the lack of local support. Although Black Lives supported the Matter Struggle, the city’s black community did not come forward. There was no mobilization on the part of the churches or pastors, the most influential in these states, or the black elected representatives.

Based on the second time. The union was on the doorstep of the communications company, but the workers were fired for fear of being found by the employer. The only way to organize this type of campaign is to avoid that sense of dread, going from house to house and gathering outside, which complicates the Govt all too much. An electronic campaign through social networks is not enough, as the trade unionists did in Bessemer.

The only way available to the employer for the unions is to build solidarity. The trade unionists will definitely contest the election “Illegal Interference” Creating Trade Awareness As anti-unionism is widespread in a country, especially in a region, resume campaigning on behalf of the employer.

TV5MONDE: Biden has shown his support for the trade unionists, will it improve workers’ rights?

Donna Kesselman: Joe Biden has been a right-wing Democrat politician all his life. He was selected from the state of Delaware, the tax haven of the United States, which is home to large corporations and banks. He has always represented the interests of Grand Capital.

Joe Biden is a center-right Democratic politician. He has always represented the interests of Grand Capital.

He was also in the Obama administration, which during the 2008 campaign promised to reform the right to regulate to facilitate unionization, including reforming the two-tier trade union structure. He did not do so, which led to a breakdown with the unions and to major social struggles such as the “Fight for 15” movement in 2012, but to occupy Wall Street.

Moreover, paradoxically Donald Trump, a billionaire populist, was able to regain the support of the white working class base, simply frustrated by the devaluation of the money laundering operation. In 2016, it was these voters who rocked elections in three key states: Pennsylvania, Michigan and Wisconsin. This is thanks to the same paid workers who voted for Obama in 2012, but voted for Trump in 2016. This union platform played a major role in Biden’s election. This prompted him to take a firm stand on the side of workers and unions in the Govt crisis, in the first decisions of his presidency.

The Biden government has also introduced reform of the right to regulation. Although it will bring in important measures, including restrictions on employers intimidating workers during a union referendum, it does not go beyond traditional demands and does not propose a change in the voting system. The chances of this reform passing are slim because the Democrats are so divided and the party’s moderates are likely to oppose it.