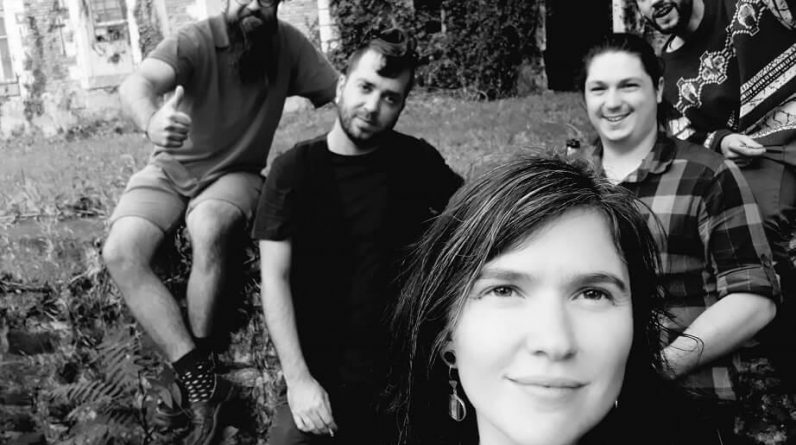 Who is behind the peel, and what is your universe?
Peel five Breton or Mayan musicians from different backgrounds!
Our music draws its inspiration from the vast North American folk tradition, while at the same time modernizing it.

Can you tell us about the album you are producing?
So the album we are producing is the first of this project, so we want to release an album that fits the general mood of the group. It can be mesmerizing as well as catchy music with a lot of work around the voices.

How do you work with the organization of your topics?
For all the songs, we act the same way. They are first composed by the singer, who writes all the songs, or by the guitarist.
Then it is the work of arranging with all the musicians.
So everyone is involved in the making of a song.

Peel means earth / zone. What place does the Gaelic language play in your titles?
In the universe of the Gaelic inspiration group, it is found in our musical inspirations, but it is not found in any of our texts. We both don’t talk Gaelic, so that doesn’t make sense.

Can you learn more about the tool area and the compatibility you provide for the tools?
The instrumental part in this project is just as important as the singing parts!
One does not go without the other! The two work simultaneously to be very compatible with precision.

Tell us about the title Woods again And its clip …
Back to the woods A tribute to the Kingdom of Nature and the Animal, part of which is in danger. This is a somewhat bitter observation, though the text does not say alarmist. He wants to be like one – news! – Awareness of the absolute need to protect what is still viable! The clip was filmed in Brittany and through its illustrations, director Logan Descombs knew exactly how to magnify the landscape and the beauty of the birds filmed, in perfect harmony with the lyrics of the song.

How do studio recordings go?
We have already recorded the first half of our album in the studio and the second half will take place before summer.
We record all the percussion instruments (drums, bass, guitar, banjo) together to sustain life and the moment. Then the violin, then the lead voice and that’s what we do with all the singers!

What motivated you to do crowdfunding?
Motivation is not words. We had to make a decision between waiting or continuing. So we decided to make progress on our project anyway, but since we didn’t have concerts and therefore didn’t have much money, we couldn’t continue to record our album and we got stuck!
This is what we do Let there be a call for unity Not to be limited to everything and to perpetuate the culture.

What is the visual universe of your album, do you think you will create a clip?
Let’s keep a little mystery!
We are currently producing several clips that are currently stand out. All of this will start again following the crude funding.

Why is it important to offer this vinyl project?
Vinyl is important for two reasons:

Does your Abum already have a name?
Another mystery!

Why is culture and music so important in such difficult times as we have been for many months?
There is a lot to say about that. Music and culture are two essential things in life, not only for actors, but for music, drama, dance, circus, cinema … and all other fields that they can all name.
It affects morale and happiness, but can intellectually escape, reflect, learn, go out …
Culture and music are not important … they are essential!

How much do you miss the scene?
The stage is the realization of a project!
Visual fear, dread, stress but above all it is joy, pride, reward for a lot of upstream work!
We have been on this new project for almost a year now and we still can’t feel these feelings!
This is too long … too long …

What do you want to say to finish?
Look, smell, taste, touch, hear … Long live !!