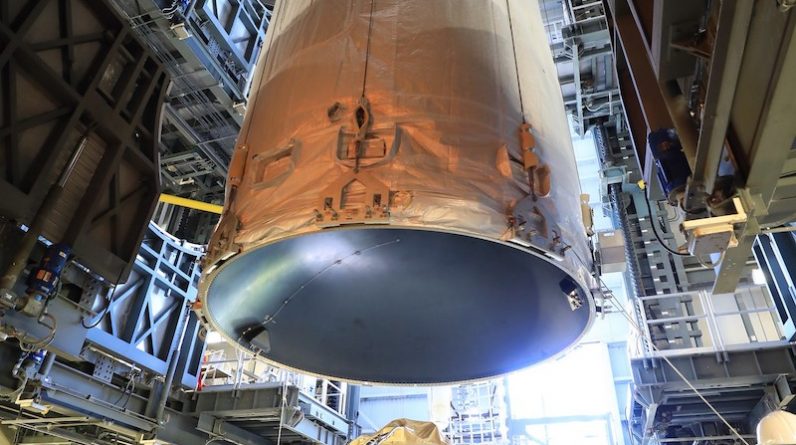 The top secret intelligence-gathering payload for the U.S. government set for launch on top of a Delta 4-Heavy rocket is likely the next in a line of sensitive eavesdropping satellites designed to intercept radio signals and other communications traffic from adversaries around the world.

The 235-foot-tall (71.6-meter) rocket will arc toward the east from Cape Canaveral following a liftoff from pad 37B set for 2:12 a.m. EDT (0612 GMT) Thursday, according to standard pre-launch warning notices released to pilots and mariners to help them steer clear of downrange drop zones under the Delta 4-Heavy’s flight path.

The launch period Thursday extends until 6:25 a.m. EDT (1025 GMT), according to United Launch Alliance, the Delta 4’s builder and operator.

Public information about the Delta 4-Heavy’s easterly trajectory suggests the rocket is heading for a high-altitude circular geosynchronous orbit more than 22,000 miles (nearly 36,000 kilometers) above Earth and closely hugging the equator. Reaching such an orbit requires a rocket to follow one of the most challenging flight profiles in the launch business, with three burns by the Delta’s upper stage to deploy its satellite payload at the targeted altitude.

The NRO, part of the U.S. government’s intelligence community, says it owns the payload on the Delta 4-Heavy rocket set for launch Thursday. The mission is codenamed NROL-44.

In a “press kit” released before the launch, the NRO said the NROL-44 mission supports the agency’s “overall national security mission to provide intelligence data to the United States’ senior policy makers, the intelligence community and Department of Defense.”

Following the agency’s typical practice of minimal disclosure, the NRO released no further information about the classified payload set for launch Thursday.

But the satellite is likely related to the NRO’s fleet of “Advanced Orion” or “Mentor” signals intelligence stations flying in equatorial geosynchronous orbits. The Advanced Orion-series satellites began launching on Titan 4 rockets in 1995, following a pair of earlier NRO Orion payloads that launched in the 1980s on space shuttle missions.

The NRO began using Delta 4-Heavy rockets for the Advanced Orion missions in 2009, following the retirement of the Titan 4 booster.

Like the previous Delta 4-Heavy launches with Advanced Orion satellites, the launch time moves around four minutes earlier each day.

“The use of the Delta 4-Heavy, the eastward trajectory, and the four minute per day earlier time of liftoff, point to the launch of the eighth Advanced Orion satellite,” said Ted Molczan, an authoritative skywatcher who tracks satellite activity. “This signals intelligence spacecraft is so large, that when seen from Earth, it shines with the brightness of an 8th magnitude star, making it easily visible with small binoculars.”

Before the launch in 2010 of a suspected Advanced Orion satellite, then-director of the NRO Bruce Carlson called the payload the “the largest satellite in the world.” The satellites are believed to carry giant antennas that unfurl to a diameter of up to 100 meters, or 328 feet, once in space.

The antenna can likely be tuned to listen in on telephone calls, collect data transmissions, and eavesdrop on other communications among U.S. adversaries.

The geographic coverage area for the satellite set for launch Tuesday is unknown, but the Advanced Orion spacecraft span the world, flying at just the right altitude to orbit the Earth at the same rate the planet rotates. That allows the satellites to remain fixed over the same region of the planet.

It’s also not known whether the new satellite will replace an aging member of the Advanced Orion fleet, or expand the network’s coverage.

Three RS-68A main engines, each built by Aerojet Rocketdyne, will ignite five seconds before liftoff. The engines will consume three tons of liquid hydrogen and liquid oxygen propellants per second to power the Delta 4-Heavy rocket off the pad with 2.1 million pounds of thrust, equivalent to 51 million horsepower.

With its center engine throttled down to conserve fuel, the Delta 4-Heavy will surpass the speed of sound about a minute and 18 seconds later and soar toward the east over the Atlantic Ocean.

At T+plus 3 minutes, 56 seconds, the rocket’s 15-story-tall side boosters will shut down their RS-68A engines, then separate from the Delta 4 two seconds later to fall into the Atlantic. The center booster will ramp up thrust to full power to burn for another minute-and-a-half.

After climbing into the rarefied upper layers of the atmosphere, the Delta 4 will release its nose cone to shed weight and reveal the NROL-44 payload. The trisector fairing, designed especially to accommodate large NRO and military satellites, jettisons from the launcher in three pieces rather than in two halves like payload shrouds used on most other other rockets.

At that time, the mission will enter an NRO-ordered news blackout. ULA will end its live coverage of the launch, and the rest of the launch sequence will occur without any real-time updates on the progress of the flight.

Three firings of the RL10 upper stage engine will be needed to place the NROL-44 payload into its targeted geosynchronous orbit.

The first burn will put the rocket into a preliminary low-altitude parking orbit, and a second burn will raise the apogee, or high point, of the orbit to more than 20,000 miles to reach an elliptical geosynchronous transfer orbit.

After a coast of several hours, the rocket will reignite the RL10 engine to place the NROL-44 payload into a near-circular path around Earth, and nudge the satellite into an orbit with an inclination near the equator.

Confirmation that the mission was successful is expected to be released by ULA and the NRO around seven hours after liftoff, once the spacecraft separates from the Delta 4’s upper stage.

After Thursday, four more Delta 4-Heavy rockets are scheduled for launch through 2023, when ULA plans to retire the Delta rocket family in favor of the next-generation Vulcan Centaur launcher. All four remaining Delta 4-Heavy missions will loft NRO payloads — two from Cape Canaveral and two from Vandenberg Air Force Base in California.