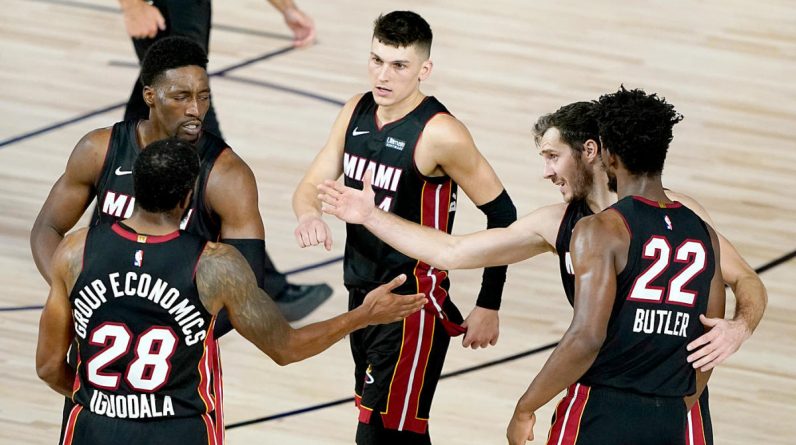 The Miami Heat find themselves in a good spot as they now lead the Indiana Pacers 2-0 in this first-round playoff series after a 109-100 win Thursday afternoon. The Heat started the game strong, behind Duncan Robinson’s three straight 3-pointers, and aside from a tightly contested first quarter where both teams went back and forth with the lead, Miami controlled the majority of this game. Robinson’s seven made 3s tied the franchise record for most 3-pointers (7) in a playoff game, heightening his profile as one of the premier 3-point shooters in the league. Robinson also made NBA history by draining seven or more 3s without taking a single 2-pointer in a playoff game.

In addition to Robinson’s scoring, the Heat found contribution in other places as All-Star forward Bam Adebayo had an unusually quiet game, mainly due to early foul trouble that kept him out of much of the first half. The Heat got big performances from Goran Dragic — who started again in place of the rookie Kendrick Nunn. The Slovenian guard finished with 20 points and six assists, on top of Jimmy Butler’s 18-point, six-assist, five-rebound, two-steal performance. The Pacers tried to keep pace with the Heat’s hot shooting, but simply did not have the personnel to pull it off. Victor Oladipo led Indiana in scoring with 22 points, but again it wasn’t his typical All-Star, dominant performance that we’ve seen him produce.

The Heat now lead the series 2-0, with Game 3 set to take place on Saturday. Here are three takeaways from Miami’s win over Indiana.

Here are some numbers from Game 2 on Robinson: 24 points, 7 for 8 from 3-point range and a plus-9 to finish the game. Robinson tied the Heat record for most 3s made in a playoff game, and started out Game 2 on absolute fire. It’s strange as you would think Indiana would’ve studied some game tape on Robinson, considering he is fourth in the league in 3-point percentage, and against the Pacers this season he’s shooting 41.2 percent from deep. But no, Indiana went with the same game plan it had in Game 1, which was basically leave him open on the wing and force him to make shots. What a terrible idea. Yes, Robinson shot just 25 percent from long range on Tuesday, which resulted in just six points in Game 1, but relying on him having a horrible shooting night like that again is just playing with fire (pun intended).

See also  After Sora, the NFT will make their debut in American football as well

Instead of Robinson air-balling 3s and clanking them off the rim like in Game 1, he went 3 for 3 from deep — Miami’s first three shots of the game — and continued to hit shot-after-shot when they needed it. Since arriving in Orlando, Robinson’s been shooting 43 percent from beyond the arc, and this performance Thursday showed that Game 1 was just an abnormal performance from him. He’s not going to be as hot as he was this afternoon, but he’s definitely shown Indiana that it can’t just not rotate a defender on him, otherwise he will put up 20 points if given the space.

Due to two early fouls in the first quarter, Miami’s do-it-all point-forward was limited significantly in the first half. In fact, Adebayo finished the first half with zero points and just one shot attempt. Compared to the 17-point, 10-rebound, six-assist performance from Game 1 for Adebayo — and his play all season long — Thursday was an atypical outing for him. However, Miami’s depth made it so Adebayo’s lack of contribution on offense didn’t matter much.

In addition to Robinson’s great game, the Heat got a vintage Goran Dragic performance in the form of 20 points, six assists and three rebounds. It looked the the Dragic of old: the crafty, sly guard who knew how to manipulate the defense to get a foul call, or slither through defenders toward the rim. It’s his craftiness, mixed with his postseason experience, that made head coach Erik Spoelstra opt to go with him over rookie guard Kendrick Nunn, Miami’s starting point guard all season. So far, it’s paid off as Dragic is averaging 22 points and five assists in the Heat’s two postseason games.

See also  What has happened so far at Six Nations 2020? Table, results and more

While Dragic’s contribution has been a pleasant surprise for Miami, what hasn’t been surprising at all is Jimmy Butler’s play to start the postseason. In Game 1 it was his performance down the stretch, where he put up 10 points in the fourth quarter to secure the win for the Heat. In Thursday’s contest, Butler accomplished something that took him quite a while to do in the regular season. Over the first two postseason games, Jimmy Buckets has made four 3s; he had as many made 3-pointers in the final 23 games of the regular season. Butler’s low shooting averages have been a storyline all season long, but he’s been far more efficient in the postseason thus far, which should be an encouraging sight for the Heat, especially in Game 2 when when they couldn’t bank on Adebayo to put up his typical share of the offensive load.

3. Pacers tried getting in 3-point shootout with the wrong team

The Indiana Pacers rank 30th in the league in 3-point attempts (28), and yet decided that it was a good idea to get into a 3-point shootout with a team that ranks second in the league in 3-point percentage (37.9). It did not go well. The Heat shot 51.4 percent from 3-point range on 35 attempts in Game 2, while the Pacers attempted 34 3s and shot 35 percent from the field. That wouldn’t be a terrible performance against an average shooting team, but Miami established itself this season as a team that will drive and kick on almost every play, and have a variety of shooters on the wing to knock down shots. Indiana can’t get in a shootout with Miami going forward in this series, because that’s not their game. Victor Oladipo shot 11 3-pointers Thursday, and while he shot 36 percent from deep, it better serves the Pacers for him to drive to the basket and get points that way.

Indiana’s in an uphill battle now that Miami is up 2-0, but the NBA bubble has proven that anything can happen in the postseason, and a change in game plan could turn the tides for the Pacers to get back in this series.