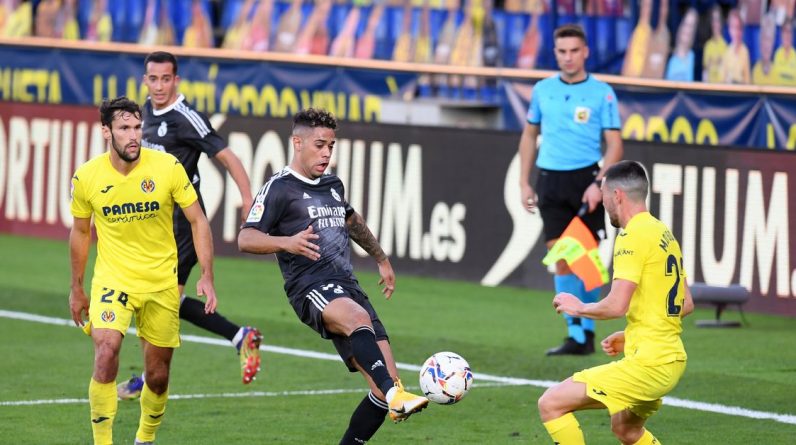 The big question for Real Madrid supporters leading up to the match is how will Zidane sort out all the injuries. Luca Jovic (Govit) and Karim Benzema (combination injury) not available, Cosmiro (Govit) and Valverde (fractured fibula) – two firm ones in the middle of the midfield – missing, and Sergio Ramos (femoral strain) both to center (Eder Milito) Left. The recently reclaimed Martin Odegard and Eden Hazard formed part of the early XI, with Mariano launching for the first time in a year and a half.

It was an up and down game, for which Madrid controlled the opening 20 minutes, including Mariano scoring the opening goal through the diving title, but Villarreal Jumped back in the second half and scored a deserving point. Below are the full match player ratings:

Thibaut Courtois – 6: With each passing game, the ball at his feet becomes more and more involved. Cruz had a few, “heart” moments with the central pass, but otherwise his delivery was fine. Sukwes was fined for the Villarreal draw Gerard Moreno Easily shipped.

Danny Carvajal—7: The right side showed exemplary fitness levels to come back from a two-month injury and play at such a high level in 90 minutes. Putting Petrasa in his back pocket, he made an inch perfect assist for Mariano in the opening minute of the game.

Raphael Warren – 7: Sergio Ramos progressed as captain in his absence. He completed some important interruptions, including a late confrontation with Gerard Moreno in the second half, and turned down a chance to score in the second half.

Nacho – 7: With the exception of the 2018/2019 season, Nacho has historically stepped foot better for Ramos in the rear center position. Today is no different. Three interruptions, two blocked shots and one clearance. Given the appearance of Milito instead of Sergio Ramos, there may be a case that Nacho should be the center of third choice.

Ferland Mendy – 6.5: A good battle throughout the game with Gerard Moreno. The Frenchman watched his every move and followed the striker, turning the pseudo-right into the center positions. Harm on the left, combined well with the Cruise and Odecord, but had some heavy touches and delivered 17 times possession.

Tony Cruise—8: The German was in his best position in the first half, playing in the quarter. He sprayed left and right passes, changing the playing field and planning the first goal. He made a good relationship with Odegaard and gave the team total control. Fatigue and a breakdown in the Madrid press and improvement in Villarreal’s signify Cruz, and the entire team fell in the second half.

Luca Modric – 6: Strange game from the Croatian, he is not poor, but not his best. There were some good drip shots to get out of the pressure, but there were some unnaturally bad passes.

Martin Odegard – 6.5: He enjoyed himself very much in the first half, with quick touches and good movement as a very advanced midfielder. Made some precise long balls to shift the playing field from right to left. His main role, however, was to help control the attack and help the team fail to make a key pass or get more than one shot on target.

Harm to Eden – 4.5: He fought to get involved in the competition and seal his power in the game. Tried only two drops, one was successful. There were 0 key passes and 0 shots.

Lucas Vasquez—5.5: His off-ball effort and movement in the defensive phase of the game was impeccable in the first half, but at least in the second. Mariano cut the ball to the winger on more than one occasion and his shots failed to reach the goal. Pervis Estupinian struggled as he entered the match.

Mariano – 8: What more can you ask Mariano? He gets a golden opportunity and gets his chance. His effort, commitment and desire were never in question.

Vinicius JR – 4: Very bad view from Brazilians. His pass was cut when Madrid tried to use the counter-attack. That mistake immediately led the Villarreals to launch their own counter-attack and receive punishment. Overall in the final three he passed badly and he did not bring the dynamic or accuracy needed to help Madrid.

ISCO – 5.5: I like the transition to Martin Odegard. Isco was a good choice to leave Villarreal’s press, but the rest of the midfield was outnumbered, requiring an option like Valverde or Casemiro worse than Isco.

Marco Asencio – N / A: Entered the match in the final 5 minutes for Mariano.