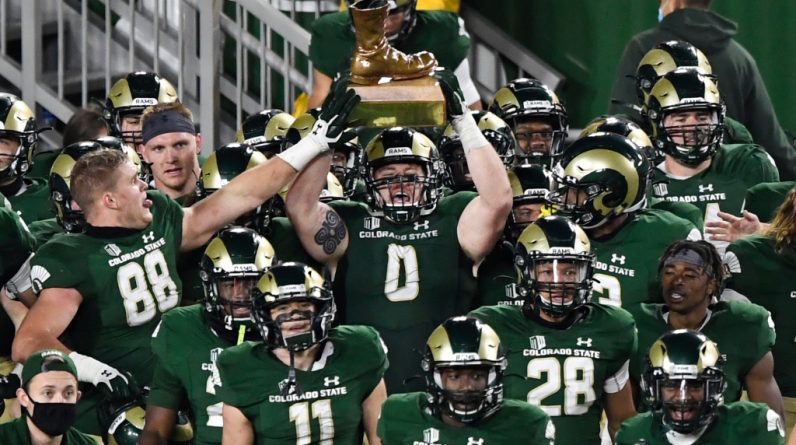 Fort Collins – The long wait is finally over. The bronze starter belongs to the state of Colorado.

CSU defeated Wyoming 34-24 on Thursday night at Canvas Stadium for the first Border War victory since 2015. CSU head coach Steve Adacio led the show in his second game as the expression of their emotion marked the signature victory.

“The startup is in Ford Collins,” said Trey McBride of the CSU tight end. “Going out there and getting that start – catching it, kissing it, loving it – getting it back is so exciting.”

The first quarter of Rams’ dominance laid the foundation for defense.

Wyoming quarterback Levi Williams, on his second night, was stopped by CSU defender Marshan Cameron – who ran it 30 yards behind. In the next possession of the Cowboys, the third and longest, Cameron faced a fragmented Williams and was rescued by football defender Manny Jones. Rams’ offense was immediately applied to the final zone with a 29-yard catch and run from McBride.

CSU took a 14-0 lead after the first quarter after a long-missed field goal.

“We talked about generating revenue throughout the week,” Cameron said. “The first thing on my mind is getting the ball back. I saw the opportunity and took it. “

The Rams made a change in starting quarterback on Thursday, with senior Patrick O’Brien receiving first-year graduate replacement Todd Centio, who started at Rams’ previous loss at Fresno State. Former Nebraska relocator O’Brien says the reputation for a big hand.

He presented against the Cowboys. O’Brien completed 26 of 185 for 255 yards, two touchdowns and zero interceptions.

“Patrick competed very hard and did a good job,” Adacio said. “He managed the game well and had some great throws. He had a good balance.”

CSU’s airstrikes have greatly benefited since the return of broad-receiver Dante Wright, a newcomer to All-American last season, who lost Fresno State due to the isolated protocol. On Thursday, Wright was dragged in 10 receptions for 146 yards.

“Dante’s vertical speed was a big factor in the game,” Adacio said.

CSU’s lead grew to 17-0 in the second quarter with a chip-shot field goal by kicker Robert Lees.

Suddenly, Wyoming’s guilt awoke from its slumber, overshadowed by a series of quick drives down the drive. The Rams went back when O’Brien entered the middle of the final zone in the second quarter, retaining two possessional advantages at halftime 24-14.

CSU’s defense faltered, but in the third quarter Wyoming reached the Rams’ 5-yard line following a 6-minute voyage. Yet the Cowboys finished third and reached a field goal. CSU did its part to widen the crime gap.

O’Brien threw a 38-yard strike to McBride in the middle – a second touchdown to the senior tight end – to take a 31-17 lead. Williams added a touchdown midway to Wyoming on a quick score in the fourth quarter, but it was too low, too late. O’Brien made several big throws to put the watch out and Liz was linked with a 48-yard field goal to give the Rams the win.

“It’s the best energy I’ve felt since I came here,” O’Brien said of the Post Game Locker room celebration. The boot from Fort Collins is long gone. This is very special to me. ”

CSU’s reputation has been temporarily mitigated under Adacio for stumbling in competitive games, a key factor in coach Mike Bobo’s 2019 outing. The Rams embraced their 12-game defeat against CU, Air Force and Wyoming.

“We beat our competitors and we beat them physically,” Adacio said. “Our team has shown tremendous amount of energy, toughness and courage. We are still a new project. We are still growing. I want to think we can continue to improve.”

On Thursday, stands at Canvas Stadium were vacant in the wake of the Corona virus outbreak in accordance with Larry County health guidelines. In 2018, the border war was attended by 32,125 people in Fort Collins.