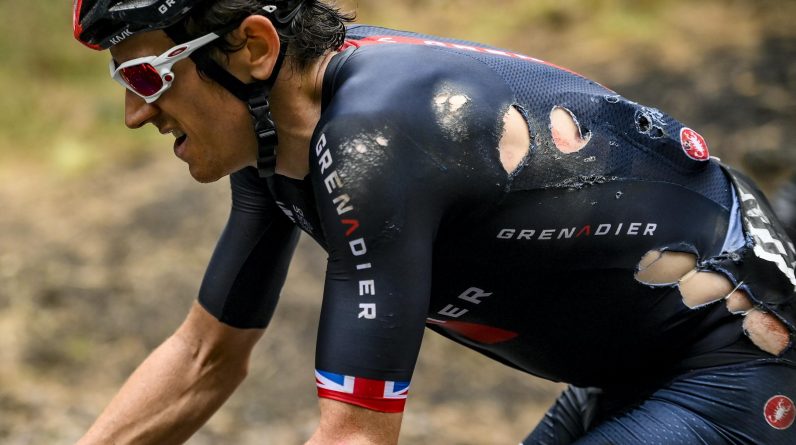 Gerant Thomas left Giro di Italia with a fractured hip before defeating Arnaud Demere Peter Sagan and David Palerini to win the fourth stage on the seafront at Villafranca Tyrrhena.

One day, when Joao Almeida took his lead in the pink jersey, the big news came just before the 140-kilometer stage left Catania, with Thomas not taking the start a day later, in a bizarre incident when his pre-race favorite hit hard on the deck with a bottle of water at the start of the stage on Monday to Mount Edna.

The 34-year-old finished the stage more than 12 minutes before being sent for X-rays. Although they did not initially show broken bones, a new scan on Tuesday revealed a “small fracture in the lower part of the hip,” according to a report by the Enios Grenadiers.

“It’s so frustrating,” Thomas said. “I’m going to do so much work in this race. I did everything I could, rather than win the tour. I think I’m fine, not in good shape. I feel good. So this is how it ends.

“I was so ready to start today. I woke up and wanted to start with the boys. I wanted to at least help them get on stage for the next few days, but I knew something was wrong, so we went to get these extra scans.

“It makes the decision easier when there’s a fracture in some way, because obviously I don’t want to do more damage.”

Thomas’ accident was part of a dramatic shake-up of the general classification of the Sicilian volcano, but a day later the focus shifted to the sprinters, which gave a long downward approach to the finish line.

Sagan’s Bora-Hansciro team worked hard to keep some of his main rivals, Portella Montrasi, away from some of his sprint rivals, and even though Elia Viviani re-entered, Fernando Gaviria had to drop the chase.

But for all of Bora’s hard work on the climb, they lost their position in the final corner when they reached the sea edge. Sagan started an early pace as Demarre’s Grubama-FDJ teammate Miles Scottson’s late charge was wasted, but could not stop Demarre from going for a photo finish.

Zero debutant Sagan takes another second place after finishing second to Diego Ulysses on Sunday, a very familiar feeling to go with his 16-level win for a ride that now ranks 30th at the Grand Tours.

Almeida used his slender lead in a pink jersey 25km from home, picking up two bonus points from stage winner Jonathan Gaiseto on Monday, who started the same day.

Otherwise there was little change above. Wilco Gelterman was fourth, 44 seconds down, while two-time Zero winner Vincenzo Nibali was sixth in 57 seconds, followed by Jacob Fooklsang and Steven Kruiszwick in ninth and 10th, respectively.

After Simon Yates’ struggles over the withdrawal of Mount Edna and Thomas, James Knox, a teammate of Almeida’s Desinink-Quickstep, is 16th, one minute 42 seconds down.

Meanwhile, Thomas is heading home and his 2020 season will definitely be a premature end. He had targeted the Tour de France, but in August the form was less in the Criterium to Tobin, which led to a revival and a switch to Giro.

His second place overall at Tireno-Adriadico and fourth place in the time trial at the UCI Road World Championships underscored his preference and topped the overall standings from Saturday’s opening trial.

But misfortune happened again, three years after the last attempt to win the pink jersey, which ended effectively in a police motorcycle accident on the ninth platform of the 2017 Zero.

At the end of the podium on Tuesday, two riders from the Winnie the Pooh-KTM team – Luca Wackerman and Etienne Van Emble – appeared to be hit when roadblocks were thrown in the final.

“Walkerman was sent to the hospital. He was very conscious – it was not clear if he had broken his hip.