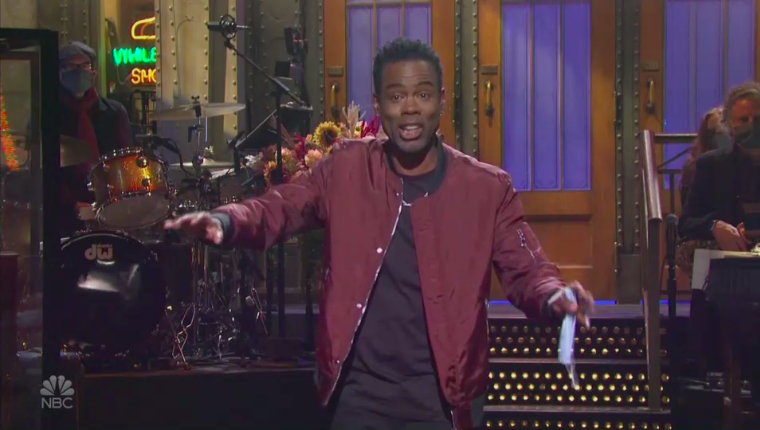 Chris Rock First host “Live Saturday nightThe 46th season, he had a tall order in front of him. Not only did the show return to Studio 8H for the first time this season, but also for the first time since early 2020, when the Corona virus infection shifted the end of their Season 45 production to “home” episodes.

Rock walked out on stage in a mask, but immediately removed it to deliver his monologue, which began by addressing President Donald Trump as the “elephant in the room” who is in the hospital with COVID.

“My heart goes out to COVID,” Rock said.

Covid took center stage on his monologue as he briefly touched on new protocols in the studio, allowing the show to go live and live. He agreed with the studio audience, noting that they had been fully tested before they were allowed in and that they were all first responders. “We’re letting people die tonight so they can see a good show,” he joked.

He also pointed out that he was wiping daily. “I haven’t had so many things on my nose since I shared a dressing room with Chris Barley,” he said.

Commenting on the “re-negotiations”, he sees couples passing by during epidemics, and he finds a way to engage in political discussion. “I think we need to re-negotiate our relationship with the government,” he said. “Does this work? I think Joe Biden should be the last president. We need a new organization, right? என்ன Anyway, what’s been your job for four years?”

He continued, “We have agreed in the United States that we should not have kings, but we have lords and duchesses who run the Senate and Congress.

Rock did not completely overthrow the current president. One good thing is that “he’s got more energy than any 75-year-old man in the face of the earth,” comparing him to a “dominating female boxer” like Rhonda Rouse.

He noted, “Come out and vote, but you don’t want the government to vote. Why do I know they do not want you to vote? Because Election Day is a Tuesday in November. If this show was ‘Tuesday Night Live’, it would have been canceled in 1975. ”

“We have to take this seriously, man,” he said. “Everything that happens now, we can copy this – we can win this – if we face it together.”

“Saturday Night Live” airs Saturday night at 11:30 a.m. from beach to beach. Look at the whole monopoly of rock above.

Variety is the best