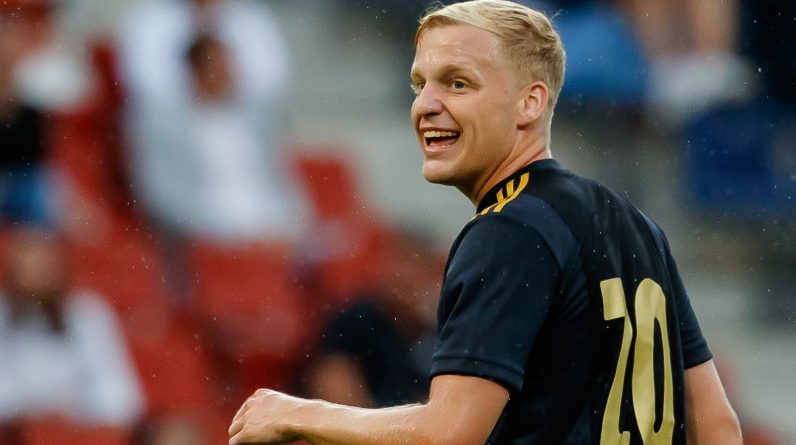 Donny van de Beek is undergoing a medical in the Netherlands ahead of his £40m move from Ajax to Manchester United.

The deal, which is thought to be in the region of €39m, plus another €5m in add-ons, is expected to be completed in the next few days while the player is on international duty with the Netherlands.

The 23-year-old is having his medical while with the Netherlands squad before travelling to the UK following the Nations League games against Poland (September 4) and Italy (September 7).

United have scouted Van de Beek extensively, with the player left out of Ajax’s squad for the Dutch champions’ friendly with Eintracht Frankfurt on Saturday amid rumours of an imminent move away.

Van de Beek helped Ajax reach the 2018-19 Champions League semi-finals, scoring four goals along the way and 40 in all competitions over the last three seasons.

In May, Ajax chief executive Edwin van der Sar confirmed the midfielder will be allowed to leave, but only for a suitable fee.

Van de Beek was close to joining Real Madrid prior to the coronavirus pandemic, but he did not complete a medical or sign an agreement with the club.

The Transfer Show also reported on Monday there was a preference for any deal involving him to be completed before Ajax kick off their new season in the Dutch Eredivisie against Sparta Rotterdam on September 13.

The Government has also confirmed to The Transfer Show that Van de Beek will not need to self-isolate for 14 days in the UK provided he is a registered Manchester United player before either of his games for the Netherlands.

If the Dutchman becomes a United player prior to the Netherlands’ matches against Poland or Italy he will be allowed to apply for an exemption on sporting grounds.

The same exemption currently applies for all Premier League and EFL players away on international duty from the UK, and for those who are competing in games abroad, such as Liverpool’s friendlies being played during their pre-season camp in Austria.

Netherlands is not currently in a travel corridor with the UK.

Donny van de Beek is a man in demand, but why has he garnered so much attention?

With incredible versatility, Van de Beek can operate in a central or attacking role and has been described as the classic box-to-box midfielder.

The 23-year-old has the ability to play anywhere across the middle – a trait that will only increase his value – and as well as being that vital link between defence and attack, he is more offensively minded than other central midfield players.

He has developed that special talent of making late runs into the area to latch onto forward passes, catching out even the most astute of defenders.

But he is also not afraid of sitting deep and doing the hard work when he needs to. According to WhoScored.com, Van de Beek makes an average of two tackles per game in the Eredivisie – the fourth highest in the Ajax squad – and can help out in a more defensive role when needed.

Even fellow countryman and former Ajax assistant manager Dennis Bergkamp had him pegged as a special talent at a young age.

In quotes carried by the Daily Mail, Frank de Boer, who Bergkamp worked under at the club, recalled: “Dennis started talking enthusiastically about a talent in his youth team. It was a boy who reminded Dennis of himself at that age. That was the signal for me to keep an eye on that guy. That was Donny.”

“The personal terms shouldn’t be an issue for Van de Beek – he wants to come and a medical could take place on Thursday, before he plays for the Netherlands against Poland on Friday night.

“Manchester United have moved quickly on this – they wanted to bring in a midfielder to bolster their options and not just rely on Paul Pogba and Bruno Fernandes; it will likely be a rotational policy – three players for two positions.

“Getting Van de Beek in when other clubs have been busy will take some of the heat off Ole Gunnar Solskjaer and Ed Woodward but Jadon Sancho remains their No 1 target this summer. I think it will go on and on, though; I don’t see Man Utd writing a £100m cheque so it will be a complex deal to do.

“There’s a feeling Sancho wants to come to Manchester United so there is the will there; United will keep pushing but they’ll also look to fulfil what they want elsewhere, which is a centre-back to put pressure on Harry Maguire, Victor Lindelof and Eric Bailly and be a potential first-team starter.

“They have the finances for Sancho but it’s whether they think the environment is right. There is a chance, though nobody is saying it publicly, that it might go to next summer.”

Not the end of United’s summer business

“Manchester United are not going to stop with Donny van de Beek. Jadon Sancho is their No 1 target, there’s still been no movement on that, they haven’t made a bit for him yet.

“There’s an interesting development about Dayot Upamecano, one of the best young centre backs in the world, one of our colleagues, Mark Ogden from ESPN, today said United are interested in signing him. Recently he signed an extension with RB Leipzig, but that has a release clause which kicks in next summer for about £40m.

“My understanding was that next summer he was likely to move to Bayern Munich but obviously, there’s nothing stopping clubs like United trying to sign him this summer.”

The 23-year-old is dating Bergkamp’s daughter Estelle, and Van der Kraan believes the Dutch legend played a key role in selling Van de Beek on the merits of playing in the Premier League, instead of waiting for potential moves to La Liga giants Real Madrid and Barcelona to materialise.

“Twelve months ago there was an agreement with Real Madrid. They were absolutely sure they wanted him. The Covid situation has changed that,” Van der Kraan told Sky Sports News.

“Then there was Barcelona up until this weekend. Ronald Koeman is a big fan of him but he had no cash available to sign him.

“The player could maybe have waited and been sure of a move [to Barcelona] but let’s look at who was in the background here.

“Dennis Bergkamp, the former Arsenal No 10, is his father-in-law these days and I am sure Donny Van De Beek has knocked on his door and said ‘look, where do you advise me to go?’

“I think Dennis said ‘look, the Premier League is the place where you want to be’. Dennis did not do well in Italy when he was with Inter Milan. When he came to England, that was heaven for him in his football career.

“I am sure that advice was vital for Donny van de Beek.”

‘Ole trying to build squad to challenge on several fronts’

Former Manchester United goalkeeper Mark Bosnich believes the deal would be a “fantastic move” for both the player and the club, and says United need to continue to increase the depth of their squad.

“Those that watched the player during his time in Holland have seen the progress that he’s made. I think the way Ole (Gunnar Solskjaer) wants to move forward, it’ll work really, really well,” Bosnich said.

“I think he’ll play more often than not.

“You can tell that Ole is trying to build a squad that will be sufficient for them to challenge on several fronts, not just for one particular competition.

“He knows from his own experience from being at the club when they won the treble, they had four strikers – himself, Teddy Sheringham, Andy Cole and Dwight Yorke. It’s very important to make sure you have back-up in each position.”

All the latest news, analysis and rumours from the window in one place.

The summer transfer window will run for 10 weeks from July 27 and close at 11pm on October 5.

A domestic-only window for trades between the Premier League and EFL then runs from October 5 and closes on Friday, October 16 at 5pm.

Follow all the news and analysis on Sky Sports News and across Sky Sports‘ digital platforms, including with our dedicated Transfer Centre blog.

Sky Sports Fantasy Football is back!

Another year, another £50,000 jackpot on the line. Sky Sports Fantasy Football makes its return for the 2020/21 season.