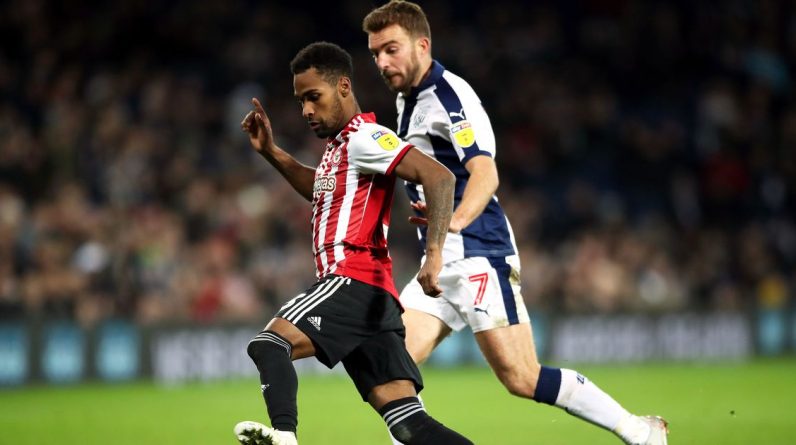 West Brom’s first competitive pre-season friendly has ended in a defeat after they were beaten by Championship outfit Nottingham Forest at St George’s Park on Saturday lunch-time.

Lyle Taylor, Forest’s new signing from Charlton Athletic, scored the only goal of the game in the first half as the Baggies got their first run-out since they secured promotion to the top flight against QPR at the end of July.

The friendly brought to an end a week-long training camp for Slaven Bilic and his players at St George’s Park, as they intensified their efforts to be prepared for the league kick off which takes place on September 13 against Leicester City at The Hawthorns.

Forest star Joao Carvalho came the closest early on to opening the scoring when he rattled the woodwork from a free-kick.

Albion then thought they’d taken the lead when Kyle Edwards’ cross was diverted into the net by fellow winger Matt Phillips, but the officials ruled the goal out for offside.

Taylor converted to hand Forest the lead shortly after that false alarm at the other end.

Albion will have another friendly at the club’s training ground this coming week and then they play away for their final preparation run-out against an undisclosed opponent next Saturday.

Bright Osayi-Samuel and Queens Park Rangers are still in talks over a new contract – but there doesn’t appear to be any imminent agreement between the two parties.

Winger Osayi-Samuel is a player who West Brom have had a longstanding interest in, and who featured against Albion on the final game of last season as they secured promotion to the Premier League.

The former Blackpool man came close to leaving Loftus Road earlier this summer when a move to Belgian outfit Club Brugge was lined up, but Osayi-Samuel and his representatives eventually decided against going through with the deal.

It’s left him, for now, back in West London and preparing for the new Championship season, but with a hope that he may attract interest from the Premier League.

Having re-opened negotiations over a new contract – Osayi-Samuel has one year left on his current deal – there doesn’t appear to be any progress made just yet. QPR will look to sell if there’s no indication that an agreement will be reached.

He is understood to be available to Albion for under £5m, and is on their shortlist of transfer targets although other deals are in the pipe-line as the Baggies chase extra attacking options.

Hoops boss Mark Warburton recently applauded Osayi-Samuel for his application amid the speculation and has urged the player to leave such negotiations to his camp.

“Obviously, we’ve got a question mark over certain players – that’s been well documented for many, many weeks. But those guys have applied themselves really well,” Warburton said earlier this month.

“All credit to them. Their job is to focus on football. Players come in, and players go out. All you can do as a professional athlete is concentrate on what you can control – how you apply yourself, how you train and how you work. Let the agents and the various other people at higher pay grades get on with the rest.

See also  Football: It's over for the AAF

“If you work on your game, there is not much more you can do. As I said, those guys deserve a lot of credit for how they’ve applied themselves.

“I’m sure the squad will change significantly in the coming days and weeks. We want some additions to come in, and we’ve got to make sure we look after each and every player.

In our daily Baggies bulletin, we’ll be bringing you the latest breaking news, transfer features and comment pieces, as well as the key talking points for fans.

It’s easy and only takes seconds.

Simply type your email address into the box at the top of this article and hit sign up.

And that’s it, you’re all set. You can also sign up here.

If you decide later that you no longer wish to receive the emails, simply follow the unsubscribe link in one of the newsletters – but we don’t think you’ll want to.

You can also get all the latest updates by following us on social media here Facebook and Twitter.

We also have a free app which you can download. It is always up-to-date with the latest news from across the region. Google Play Store and App Store

West Brom are understood to have an interest from Rico Henry this summer – but if they’re to land him, they’ll have to see off fresh Premier League competition for his signature.

See also  Did the heirs of Montana, Favre, Manning, Elway, Marino win in the NFL?

Albion are looking a freshening up their full-back options in this transfer window, among other positions in the squad, and local lad Henry is viewed as an ideal target.

Leeds United, Aston Villa and now Brighton all like the look of the Brentford star too, however.

Injuries have ravaged Henry’s time in West London, until last season when he played regularly and impressed as Brentford just fell short in their quest to reach the Premier League.

Failure to gain promotion inevitably means that interest from top flight clubs has mounted when it comes to the star players in what is a talented squad – and Henry comes into that category.

Speaking about Henry earlier this month, Bees boss Thomas Frank outlined his intentions to retain his services amid such interest from above.

“Rico is one of our most talented players,” he explained.

“We all know how difficult it is to find good left-footed full-backs and wing-backs and he’s one of the most talented in the division. So we definitely want to keep him longer term.”

Albion’s first choice left-back currently is Kieran Gibbs, but a recurring hamstring problem restricted him to just 15 league appearances last season, though Albion managed to get by without him as they secured a return to the top flight.

Conor Townsend stepped up admirably in his place in the second half of the season, after Nathan Ferguson had initially moved over from right-back in the first half of the campaign – before he played his final game for the club in January.