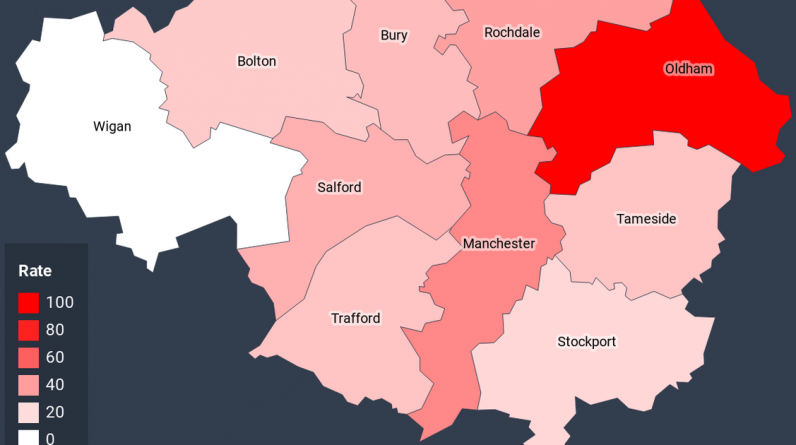 The number of coronavirus infections in Greater Manchester has increased by more than a fifth since the introduction of local restrictions to halt the spread of the virus.

New rules were imposed by the government across all ten boroughs in the region on July 30th after data showed a marked increase in confirmed cases earlier that month.

Updated figures now reveal how the spread of coronavirus has continued in the fortnight after the new restrictions were brought into force.

They show that across the whole of Greater Manchester the number of positive tests increased at a similar rate to the two weeks leading up to the restrictions.

When the local lockdown was imposed the seven-day average was 117 cases per day across Greater Manchester. That rose to 144 cases two weeks later on 14th August – an increase of 23 per cent.

The peak was on August 10, when 200 cases were recorded on a single day in Greater Manchester for the first time in nearly three months.

Figures for the four days after August 10 appear to show the upward trend has started to fall away but it is too early to tell if this will continue.

There is a three-day delay in reporting test results, so the most recent available figures are for August 14.

The increase in cases in Greater Manchester has largely been driven by a spike in cases in Oldham, where the weekly infection rate per 100,000 people rose to over 100, at the time the highest rate in England.

There is also a upward trend in the city of Manchester, which is by far the largest part of the region in terms of population size.

In other boroughs, the picture has been more mixed, and in some areas cases have fallen in the two weeks since local lockdown was imposed.

In Wigan, which was the only borough in the region with an infection below the national average, there has been little change in the fortnight after the restrictions were brought in.

The number of deaths reported among patients with Covid-19 has remained low across Greater Manchester since July 30 and has shown no sign of increasing. The number of hospital admissions also remains very low.

In many areas, an increase in case numbers has been due to more tests being carried out with the positivity rate remaining level.

However, the government’s declared strategy is to take action in any local area where cases are rising, which means further restrictions could be imposed in Greater Manchester if rates go up – and existing measures are likely to stay in place unless they go down.

This is what has happened to the coronavirus infection rate in each of the ten boroughs since the local restrictions were announced on 30 July:

Oldham has driven the increase in cases across Greater Manchester. On some days it has accounted for a quarter of all cases in the region.

The weekly infection rate per 100,000 people rose from 66.2 when the restrictions were announced on July 30 to 116.9 on August 10th when the borough had the highest infection rate in the country.

Oldham has been the only borough in Greater Manchester during the last month to have an infection rate above 50 – which places it on ‘red alert’ on a government watchlist and there has been speculation that extra lockdown measures may be imposed in the borough.

The infection rate has since fallen below 100 and there appears to be a downward trend developing in the most recent figures although it is too early to tell if this will continue.

According to a government map showing cases in smaller districts, the hotspots in Oldham have been particularly concentrated in two areas – Alexandra Park and Werneth.

While cases have dipped recently in Oldham, they are showing signs of going up in Manchester, and this will be the area now causing most concern to local leaders.

If the current trend continues, the infection rate could climb above 50 this week placing Manchester on a ‘red alert’ on the government watchlist.

The city of Manchester is by far the largest area in terms of population size but has not shown high rates of coronavirus infections since the start of the pandemic, compared to the other areas of Greater Manchester.

That changed in the two weeks before the local lockdown was imposed and it was one of the key factors in the decision to bring in the restrictions across the region.

In the first week after the new rules came in on July 30, the level of infections remained relatively stable, but in the second week there has been another marked upward trend.In the week ending August 14 there were 259 confirmed cases in Manchester, which is the highest 7-day total since April.

If the number of cases continues to rise in Manchester, then that could delay any relaxation of restrictions across the region.

There has been anger from local leaders in Wigan at the imposition of the new restrictions as the borough had an infection rate lower than the national average when the rules were announced on July 30.

This has not changed throughout the two weeks of local lockdown, with the number of cases recorded each day staying in single figures for every day except August 10, when 11 cases were confirmed.

The weekly infection rate has remained below 10 cases per 100,000 population and below the national average which has been around 17-18.

The coronavirus infection rate per 100,000 people in Rochdale was 30.6 on July 31 when the local lockdown restrictions came into place, and it is now nearly ten points higher.

However, the rate was fluctuating before the restrictions came into force and that has continued during the following two weeks. On the 12 August, the rate reached 47.2 and was second only to Oldham. It has since dipped back down to below 40.

Wardleworth & Newbold Brow (with 20 cases) and Deeplish (17 cases) are the two districts of the borough with the highest number of positive tests in the week ending 13th August.

The infection rate is higher in Bury after two weeks of local lockdown, than it was before July 30th when the restrictions were brought in, but it remains to be seen if this will develop into an upward trend.

The rate has been above 30 on three days over the period up to August 14th, the highest rate seen in the borough for two months.

However, it dipped down below 25 on August 10/11, which took Bury off the ‘amber alert’ on the government watchlist. The rate has since climbed again to over 30.

Black Lane is the hotspot district in Bury with nine cases in the week ending 13th August.

Apart from a dip in case numbers on 7-9 August, the infection rate has continued on a general upward trend in Salford since local lockdown started.

The infection rate has reached 34 cases per 100,000 people and appears to be rising.

On the 10th of August there were 27 cases reported, which is the highest number on a single day in Salford since May 1st.

The hotspots in Salford have been Higher Broughton and the central area around the University of Salford.

Bolton is another borough where the rate of infections is higher than it was when the restrictions were announced in on July 30.

At the time the local lockdown measures were brought in, Bolton had a weekly infection rate of 17.7 per 100,000 people, which rose to over 30 on August 6.

The rate has since dipped slightly but remains on 26.1, which is high enough to keep the borough on ‘amber alert’ on the government watchlist.

There is no standout hotspot in Bolton in the week up to 13th August, with Lostock & Ladybridge and Gilnow & Victory both reporting 7 cases.

The coronavirus infection rate in Trafford is lower than it was at the start of the local lockdown on July 30.

The chart shows how a spike in cases had already peaked when the announcement of new restrictions in Greater Manchester was made.

At the time, the infection rate per 100,000 people was over 40 and it fell over the following week to below 25, which put Trafford briefly on the ‘green’ alert level on the government watchlist.

However, there has since been another change in direction with cases climbing since August 6th, putting the infection rate back above 25 and on an ‘amber alert’.

A hotspot which was seen in Hale and Hale Barns has since appeared to fade away and the district with the highest number of cases in the week ending August 13 was Timperley South.

After infection rates climbed steadily in the first week after lockdown measures were announced on July 30, the number of cases has since fallen away in Tameside.

Tameside remains on the ‘amber alert’ level with the hotspot districts in the borough showing as Ashton Waterloo, which had 11 cases in the week ending 13th August, and Hattersley, with nine cases.

Stockport was another area which was showing signs of an increase in coronavirus cases in the lead up to the local lockdown announcement on July 30.

In the two weeks since then, that trend has levelled off and the infection rate remains broadly the same as it was when the measures came in.

The rate per 100,000 people peaked at over 30 on August 11 but has seen tailed off to below 25, which has taken the borough off the ‘amber alert’ level on the government watchlist.

Like all other areas in Greater Manchester except Wigan, the infection rate in Stockport remains well above the national average.

Stockport had no stand-out hotspots in the week ending 13th August with Woodbank Park recording the highest number of cases over the seven period.