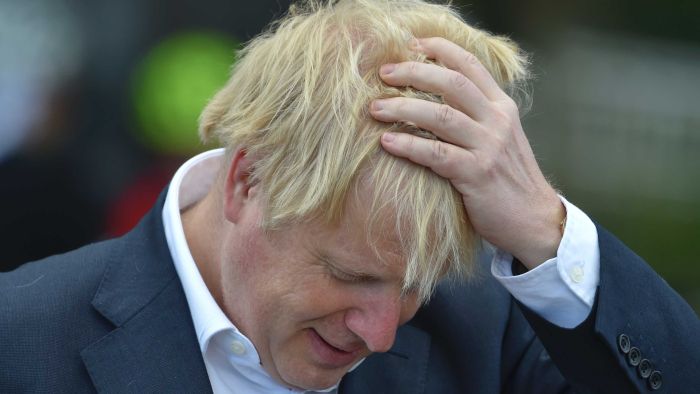 The UK Government has reversed its plan to ease lockdowns and Prime Minister Boris Johnson has warned of a potential second wave of infections as he announced changes to restrictions.

Meanwhile India tallies a record number of new infections in the past day, but the country is pressing on with reopening sections of the economy and removing a curfew.

This story will be updated throughout Saturday and was last updated at 2:45am.

British Prime Minister Boris Johnson has postponed an easing in lockdown restrictions amid fears of a second wave of the pandemic and issued a warning to Britons at the same time.

Mr Johnson gave the warning a day after a late-night announcement of a new lockdown in northern England and said the reopening of casinos, skating rinks and bowling alleys has been delayed, and wedding receptions will have to be cancelled.

“Our assessment is that we should now squeeze the brake pedal in order to keep the virus under control.”

The changes, combined with the stricter lockdown imposed on more than 4 million people throughout Greater Manchester, east Lancashire and parts of West Yorkshire, are the largest reversal of restrictions to date in the UK.

England’s Chief Medical Officer Chris Whitty said the Government had probably reached the limit of reopening society and the economy without causing an increase in the number of infections.

“We all know that what we have to try and do is to get to the absolute edge of what we can do in terms of opening up society and the economy without getting to the point where the virus starts to take off again,” he said.

More than 45,000 people in the UK have died from COVID-19, according to Government figures.

A similar app was launched in Ireland on July 8, and cases can now be traced across the island’s open border by its two separate health services.

A record surge of 55,079 new cases in the past 24 hours has taken India’s coronavirus caseload past 1.6 million, as the Government decided to lift a night curfew that has been in force since late March.

The actual numbers, like elsewhere in the world, are thought to be far higher due to a number of reasons including limited testing.

The night curfew will be lifted this weekend and yoga institutes and gyms will reopen on August 5, according to the Home Ministry.

The Government has also removed interstate restrictions on movement of people and goods.

Hotels in the Indian capital will reopen as they no longer serve as quarantine facilities.

Lockdowns remain in place across all containment zones.

Florida has reported a record increase in new COVID-19 deaths for a fourth day in a row, with 257 fatalities in the last 24 hours, according to the state health department.

The state has also confirmed 9,007 new cases, bringing its total infections to over 470,000, which is the second-highest in the US behind California.

Florida’s total death toll rose to nearly 7,000 — the eighth-highest in the nation.

Florida is among at least 18 states that saw cases more than double in July.

It has reported record daily increases in cases three times during the month, with the highest on July 12, at 15,300 new cases in a single day.

Deaths are rising at their fastest rate since early June and one person in the US died about every minute from COVID-19 on Wednesday as the national death toll surpassed 150,000, the highest in the world.

Corruption in the country’s pandemic response is also a growing problem.

On Thursday, the health minister in the country’s epicentre of Gauteng province was forced to step down over corruption allegations related to Government contracts for COVID-19 personal protective equipment.

South Africa makes up well over half the cases on the African continent and has the world’s fifth-highest virus caseload.

As cases increase, the first of thousands of South African-designed ventilators have rolled off a Cape Town assembly line.

Hospitals in the country had struggled to source them on global markets, as richer nations scrambled to obtain ventilators and protective gear, officials said.

Nico Hulkenberg has made an unexpected return to Formula One, stepping in at Racing Point after Sergio Perez tested positive for COVID-19 ahead of the British Grand Prix on Sunday.

The 32-year-old Hulkenberg lost his seat at Renault for this season so was available when Racing Point team principal Otmar Szafnauer made the call.

The German was immediately back in action for the first time since November, driving in first practice on Friday at Silverstone, where no fans are attending due to the pandemic restrictions.

“I was on my way to the Nurburgring for another racing project when the call from Otmar came,” Hulkenberg said.

“It’s obviously a difficult situation for Racing Point and Checo. He’s a buddy of mine, an old teammate and I wish him a speedy recovery. I’ll step in and try do the best I can for the team.”

The race will be Hulkenberg’s 178th Grand Prix.

Perez believes he picked up the virus on a trip home to Mexico between the Hungarian and British races to visit his mother after she had an accident.

In the past 24 hours, 1,229 new cases were recorded, marking the largest rise since a lockdown was lifted on 21 June, according to Government data.

The figure meant that Spain recorded more than 1,000 infections for a third consecutive day.

What you need to know about coronavirus: