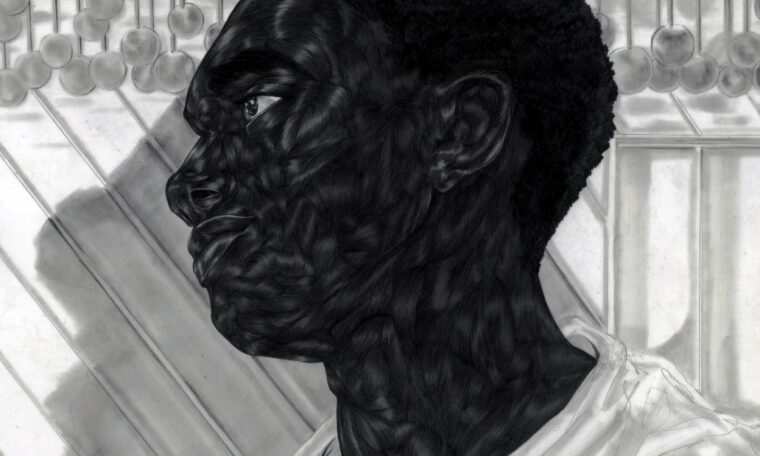 Nigerian-American artist Toyin Ojih Odutola is known for her rich and textural portraits of black life, layered through intricate pens, charcoal, and pastel.

Born in 1985, Ojih Odutola is primarily a narrator, influenced by the narrative traditions of her childhood. His 2017 exhibition at the Whitney Museum, his first solo exhibition in New York, developed a dual, interconnected narrative about two fictional aristocratic families in Nigeria.

Most recently, when the Barbican Center in London closed due to Covid-19 restrictions in March, it was only a few days before its first UK exposure. “A compensatory theory“It was scheduled to open. Now, with the show postponed, Ojih Odutola has organized a virtual exhibition for the Jack Shainman Gallery in New York.”Tell me a story, I don’t care if it’s true, “made primarily of works created while the artist was at home in recent months.

Her Barbican show, which has yet to be seen, focuses on creating myths and features 40 drawings based on an ancient legend, set in Nigeria, that the artist imagined herself. Meanwhile, his most intimate virtual show for Jack Shainman focuses on lonely, fluid stories told through images and text.

Here, Ojih Odutola analyzes both exhibitions, his rich exploration of black identity and how art can be a balm and a space for agency in a time of crisis.

CNN: Can you explain what you Will the Barbican show be seen when it performs?

Toyin Ojih Odutola: Some pieces are seven feet tall and others are very, very small. It is all based on a myth I wrote last year about an ancient civilization that settled in Plateau state in central Nigeria. For me, it was necessary to delve into the visual narration in an attractive and different way, and I felt very present.

There are these grooves in every drawing, and they may seem like a decorative motif, but in fact, it is the system at work. When you see a drawing fully populated with these lines, you are seeing the system that is not spoken, is not seen, but that is everywhere in the world of these characters. It influences and affects them but they don’t recognize it. It’s just there. So of course it affects everything.

(The exhibition) deals with gender, power, hierarchies, oppression and imperialism in a way that I hope, once revealed, is very subtle and nuanced, and speaks to the insidious nature of systemic oppression.

How did your new virtual exhibition, “Tell me a story, I don’t care if it’s true” come about?

The title of the show came to me in February before closing. It was something that felt right and applicable to the time. It is a series of diptychs, independent drawings and independent text works. These are stories that came to mind, which was quite new to me because I tend to plan many things. This show was much more introspective.

These stories are anecdotal; They are isolated bullets. There is not too much context, but just enough information to understand. There is a conversation between image and text. In one, you find a figure resting on a sofa, and you can have your ideas about what that figure is thinking: the interiority of that moment. And then you read the text, and you go back and forth between the two, and you form your own meaning.

Hearing is an activity. Take a moment, take a heartbeat. I hope it is a way to question what you see and read.

What oral or written traditions related to myths have influenced you?

I grew up in a house where the oratory was the medium. Getting together and listening to someone tell a story is a big part of Nigerian culture. I also grew up in a house with two incredibly fun parents who love to tell stories about anything. I have always treasured it. And it wasn’t until I was much older that I realized how valuable it was to have that experience and have access to it.

When I started my career, I was just drawing figures and I really wasn’t thinking about the narrative. But there is a great deal of knowledge that I already have in my own personal story and experience, and I can apply it to a visual narrative and really help people see the possibilities of figurative work.

I am strongly influenced by comics and animation. For the Barbican show, relating to epic mythology was my way of being completely free and creating something from scratch. Unlike “Tell me a story, I don’t care if it’s true”, there is no text (in the Barbican program), there is no reference for the public, and everything is from another world and strange. But what I hope is that as they walk through that space, they begin to acclimate to my visual language.

You often explore the texture and meaning of leather in your work. How has this evolved with your practice?

Initially, I wanted to find a way to visually translate how the skin felt. I use nerve lines; It is very layered, and I was mainly doing pen ink work. And then I started to include other drawing materials like charcoal and pastel, and now, more recently, colored pencil and graphite.

Ojih Odutola compares black skin to water, calling it “a mercurial surface, a terrain … a place where so much beauty and positivity proliferate.” Credit: Toyin Ojih Odutola / Barbican

When I think of the surface of the skin, I think of the work of multimedia artist Roni Horn, who uses water as a metaphor for an ambiguous and ever-changing surface. I think of the skin in a very similar light. The skin is a terrain. It is a landscape in which it projects meanings. It has its own history.

When I look at the black skin, I think of it as mercurial suffrage: a terrain, a construction, a projection, but also a place where so much beauty and positivity proliferate. It includes a lot and has a lot.

After George Floyd’s death, there has been a lot of talk about black trauma, media depictions of black people, and how those images circulate. How do you think art can play a role right now?

There is a lot of noise: the images can be noisy. But with art, it’s just you and this job. You are in dialogue with him and there is no right or wrong way to participate. Art gives people the opportunity to sit still, think and digest this moment and try to understand it.

Ojih Odutola wants his art to provide a space through which viewers can reflect and come up with their own interpretations. Credit: Toyin Ojih Odutola

I have made a pact with myself, as an image creator, that if I am going to contribute images to the large number of people available on the Internet, I will not show black pain, death or trauma.

That is my choice. And if you’re an artist who deals with those things, that’s fine. I’m not saying it’s right or wrong, but it’s very important to me that you provide images and texts that give people something else to commit to because we already know that trauma and pain are a sad and unfortunate thing that connects black people Worldwide.

Blacks are catalysts. In every society we have been a part of, our culture has left an indelible mark. That is no accident. So we should not always think that we come from a place of lack, that we are powerless. I am not saying that these are not realities. But it is not how we should read ourselves as a community, as a collective (and) as a diverse and brilliant diaspora.