Home Top News Stanley Ho’s flight to Macao in World War II laid the foundation for his fortune. But it was not without controversy 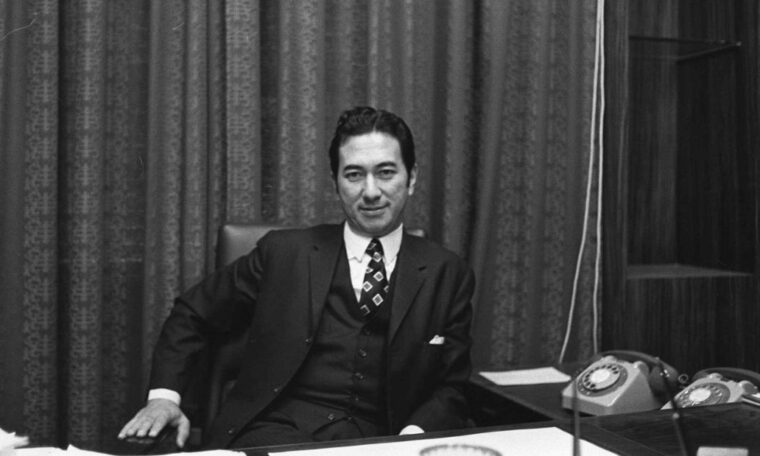 But before Ho made Macao, he had to do it himself.

Born in 1921, Ho went through difficult times when his father fled to Saigon, after his business collapsed in the late 1920s, leaving that side of the family penniless. Not long after, World War II broke out.

After the attack on Pearl Harbor on December 7, 1941, Britain and the United States declared war on Japan. The Japanese army invaded the British colony of Hong Kong where, despite fierce resistance, the city fell on Christmas Day.

Ho, who had worked as an air raid guard, threw away his uniform for fear of being executed when Hong Kong came under Japanese rule, he recalled in Jill McGivering’s book, “Memories of Macao.”

But unlike the thousands who died of starvation, in battle, or at the hands of the Japanese, Ho had options.

His great-uncle was Sir Robert Hotung, the wealthy Eurasian shopper, who was the first Chinese man to live in Hong Kong’s Peak, a wealthy district where only Westerners were allowed to reside.

In the 1940s, Sir Robert lived in Macao and invited Ho, who was then 20 years old, to join him in the Portuguese colony where he had plenty of opportunities waiting for him.

In the 1990s, Ho told historian Philip Snow, who wrote a book about the fall of Hong Kong and the Japanese occupation, “I made a lot of money from the war.”

This is how he did it.

In the early 1940s, with most of China under Japanese control, Macao found itself in a unique position in the Asian theater.

Portugal remained neutral in the war, until 1944, and as such, Macao was also considered neutral territory. The colony was administered by the Portuguese Governor Gabriel Maurício Teixeira and the enigmatic Dr. Pedro José Lobo, known simply as Dr. Lobo.

However, Japan controlled the seas and ports around Macao. That meant that Macao had to cooperate with the Japanese to allow food and supplies to enter the colony. For Teixeira and Lobo, it was a delicate balance between preserving the neutral integrity of the territory and avoiding open collaboration with the Japanese.

War conditions were difficult in Macao. Food supplies were scarce, inflation was rampant, and the colony had to deal with an increasing number of Chinese and European refugees. Smuggling and the black market flourished.

To solve this problem, Lobo created the Macao Cooperative Company (CCM), and Lobo asked Sir Robert Hotung if there was anyone he could trust to work as the Company’s Secretary.

The CCM was arguably the most important institution in Macao during the war: the organization that kept the colony fed. Its main function was to keep Macao economically alive, capable of feeding and balancing the delicate relationship with the Japanese.

Ho knew the configuration when he joined.

In an interview with Simon Holberton of the Financial Times more than half a century later, Ho said: “He was in charge of a barter system, helping the Macao government to exchange machinery and equipment with the Japanese, in exchange for rice, sugar, beans .

“He was a semi-government official then. He was the middle man.”

As MWC Secretary, Ho was empowered by Lobo to keep Macao fueled by bartering everything the island had to offer.

This was not an office job. Ho had to travel regularly by boat with payments to receive the goods and take them back to Macao. His job was to play with the Portuguese authorities, the Japanese army, the triad gangs and the various factions of China.

In his memoirs, Ho recalled that his first and most urgent task was to learn Portuguese and Japanese because his job was to exchange between the two.

There is an element of boldness in Ho’s wartime life in Macau. Navigating rice, vegetables, beans, flour, sugar and other supplies between French Indochina and Macao, along the southern coast of China and around Hainan Island, meant avoiding the pirate gangs that would carry their gold on the journey. one way and their supplies at the entrance. .

Chinese nationalist or communist guerrillas were equally interested in securing supplies or cash for them, and many viewed the CCM’s activities as collaboration with the enemy.

Japanese naval ships were known to fire on all kinds of civilian ships, while, later in the war, according to historian Geoffrey Gunn, American and British submarines could sink any ship they thought was dealing with the Japanese.

Around this time, Ho opened a kerosene factory when public fuel supply was running low, according to Joe Studwell, who conducted many interviews with Ho family associates for his book “Asian Godfathers.”

Towards the end of the war, the United States, concerned that Japan would take over Macao entirely and use it as a base to defend southern China and Hong Kong, bombed the Macao gasoline terminal in early 1945 to deny the supply to the japanese navy and air. force.

The attack, removing Macao’s only other source of kerosene, inadvertently made Ho essential to Macao’s continued operation and extremely rich.

After the war, Ho faced criticism that he had collaborated with the Japanese.

But Macau’s wartime neutrality was always subject to Japanese influence, especially after the fall of Hong Kong. And in 1943, when Tokyo demanded the installation of Japanese advisers to oversee Macao, a virtual Japanese protectorate was created on the island. Contact was inevitable. Ho claimed that he taught English to Colonel Sawa, the chief of the Japanese Military Secret Police in Macao.

See also  The first Amazon store you pay for in London

However, China’s nationalist government, which had vociferously fought against Tokyo since 1937, considered Ho and CMM’s business transactions treacherous and supported Japan’s war against China.

Chinese officials attempted to arrest Ho for collaboration, but, according to their own account of the attempt, the Portuguese colonial police protected him. At the end of 1945 Ho was too entrenched, too important to Macao’s economy for the Portuguese administration to hand him over to China.

In his defense, Ho wrote that when asked why he should work with the Japanese because of their treatment of the Chinese, he stated that he was told that “it was an order from the Portuguese government” and that “without food, the people of Macao will die of hungry “.

Then, in 1942, he married the daughter of a rich Portuguese family, giving him protection and social status. Third, he accumulated a fortune and was a millionaire when he turned 24. Fourth, he established businesses in the rice, kerosene and construction trade.

Within weeks of the Japanese surrender in August 1945, Ho returned to Hong Kong making strategic investments, such as buying a ship to start the first post-war ferry service between the two colonies.

He had cash, position, family, and good friends in useful positions.

He was ready to remake Macao and invest massively in post-war Hong Kong. In his memoirs of the period, Ho wrote: “Macao was paradise during the war.”

Ho had, as they say, a very good war.

Faced with a shortage of trucks, London offers flexibility

Power generation, US submarine to Australia, financial performance in aeronautics, hydrogen aircraft … Five most read articles of the week