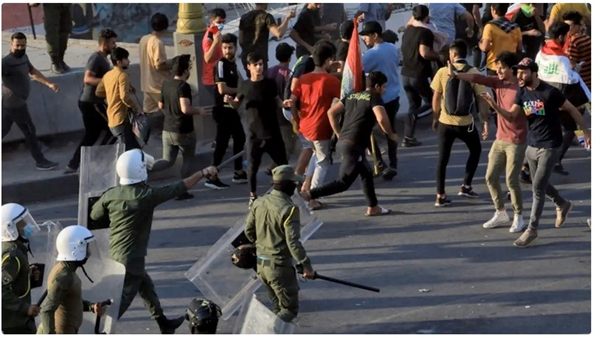 “We welcome every effort by the (Iraqi) government (IS) to hold militants, thugs and defensive groups responsible for attacks on Iraqis who exercise their right to freedom of expression and peaceful assembly, as well as their violations of the law.”

On Tuesday, two protesters were shot dead by security forces in Baghdad as they disbanded, demanding responsibility for the killings of activists opposed to the country’s political system.

Thousands of people took part in the demonstration, which included images of assassinated activists in the southern cities of Nasiriyah and Karbala, especially Ihab al-Wasani, the leader of the anti-government coalition in Karbala, who had for many years been warned about the domination of the armed forces and his house with guns fitted with silencers.

No one has claimed responsibility for al-Wasani’s assassination, which was repeated in previous attacks in a country where the armed forces control the political and economic scene.

Since the outbreak of popular protests in Iraq about two years ago, more than 70 activists have been assassinated or tried to assassinate them, while dozens have been briefly abducted.

Tuesday’s protest wounded more than 150 people, including 130 security forces, and killed two protesters with bullets fired by security forces, according to Ali al-Bayati, a member of the High Commission for Human Rights in Iraq.