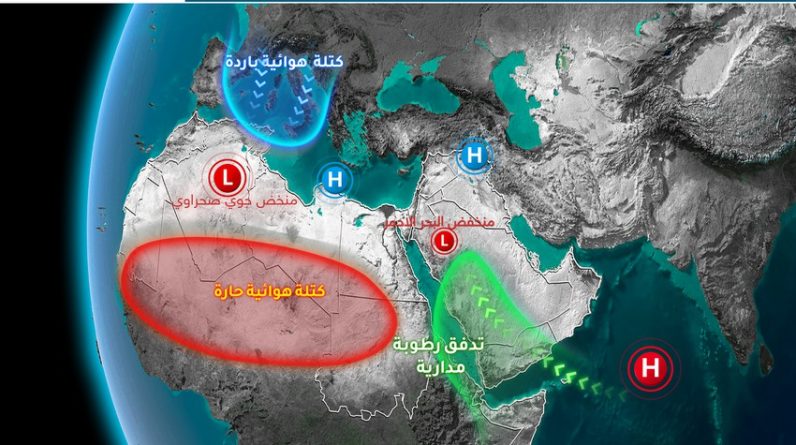 Arabia Weather – A drastic change in the airline systems on the Arabian Peninsula is expected by the weekend, while temperatures will rise in the Levant and Egypt, with rain and cold air mass in the Maghreb countries.

Activity in desert depression in Morocco, Algeria, Tunisia and Libya

A desert depression has accumulated over the week above the northern Algerian desert, working on blowing wet easterly winds towards the beaches of northern Tunisia, Algeria and Morocco, where there is a chance of rain on more than one occasion.

The beginning of a cold week in Egypt and the Levant, and the temperature rises consecutively in the second half of the week

The general eastern Mediterranean is affected by the mass of ice and snow and rainy cold winds off the coasts of northeastern Egypt and Lebanon, Syria, northern Palestine and Jordan, and the Lebanese mountains. Syria.

However, as of Tuesday, the atmosphere will return to stability, with relatively cold in the mountains and moderate spring in other parts of the country, and the first days of the blessed month of Ramadan will be relatively warm with the expectation that temperatures will continue to rise over the weekend.

Extremely hot weather throughout the Arabian Peninsula and Iraq, with the exception of northern Saudi Arabia.

Temperatures in Iraq, Kuwait, Qatar, Bahrain, the United Arab Emirates, the Sultanate of Oman and all parts of Saudi Arabia have continued to rise during the current week, with the exception of its north.

By the end of the week, however, a drastic change in weather conditions is expected on the tropical humid Arabian Peninsula, with wind turbulence returning to large parts of Saudi Arabia and Yemen, increasing the chances of rain at the start of the holy month of Ramadan.