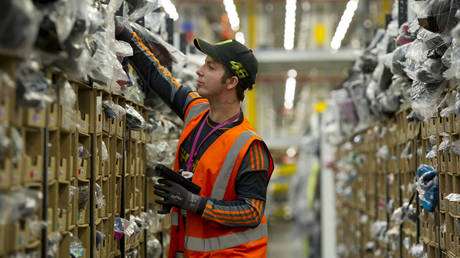 The New York Times reports that Amazon has illegally fired two workers in protest of the company’s working conditions and the impact of climate change.

According to the NYT, the U.S. National Labor Relations Board said two fired workers, Emily Cunningham and Maran Costa, were doing so. “Amazon is blaming unfair labor practices if the company does not resolve the matter.”

As Amazon employees, Cunningham and Costa staged protests against its warehouse working conditions and its contribution to climate change, uniting hundreds of workers – last year threatening Amazon that both future operations could be laid off.

Cunningham and Costa later arranged for 400 colleagues to denounce the company and fired – as Amazon explains, “For repeatedly violating internal rules. “

They demanded that Amazon increase its risk premium, childcare and sick leave, and temporarily close and sterilize the locations of employees who tested positive for Covit-19.

According to Legal Adviser Irene Stavrellis Englert, if the National Labor Relations Board finds an illegal institutional decision, it “Order the employer to deviate from unfair labor practice and take positive action to remedy the violation.” This includes re-employment of laid-off employees.

Amazon has recently faced growing controversy over its response to employee reports and complaints about working conditions. The company apologized last week for saying its employees did not urinate in bottles, revealing that drivers were aware of frequent urination and defecation in their vehicles to meet the deadline.