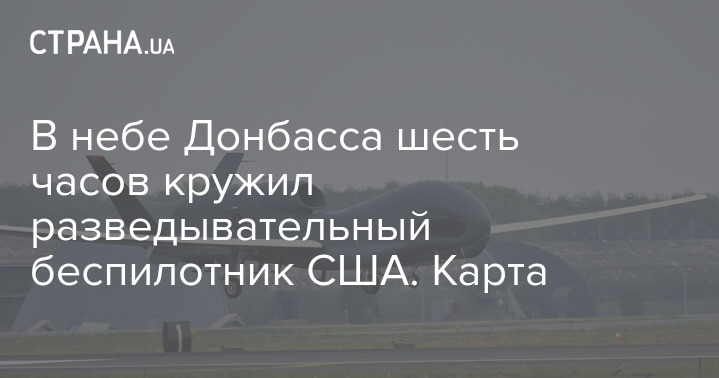 The UAV that arrived in Ukraine was based in Italy. Photo: mil.in.ua

On April 2, an American spy drone RQ-4 Global Hawk flew near the border line at Donbass on April 2. The U.S. Navy P-8A Poseidon Navy patrol aircraft also appeared in the air across our country.

about this Reports “Ukrainian military portal”.

The RQ-4 Global Hawk drone with Wall Nos. 11-2047 and Colcin FORTE10 took off from Sigonella Airport in Sicily and flew over Greece, Bulgaria and Romania, according to surveillance-rich “Plane Radar”. He then entered the airspace of Ukraine. There he formed several circles over the Black Sea, after which he proceeded to the Donbass. In this region, at an altitude of more than six hours, he carried out reconnaissance surveillance with the contact line, sometimes approaching the Russian border of the Belgorod, Voronezh and Rostov regions at a distance of 40-60 km.

Details of the route of the P-8A Poseidon patrol aircraft are not yet known.

The RQ-4 Global Hawk is a strategic reconnaissance unmanned aerial vehicle. It made its maiden flight on February 28, 1998 from a U.S. Air Force base in California.

The Boeing P-8A Poseidon is an anti-submarine patrol aircraft based on a Boeing 737-800 civilian aircraft. It is designed to detect and destroy enemy submarines in patrol areas. He can participate in intelligence and anti-ship operations and rescue operations. The aircraft can carry up to 9 tons of weapons, including ship missiles, torpedoes, sea mines and air bombs.

We also wrote that the President’s Office had invited a NATO aircraft to conduct air patrols within our country’s borders.