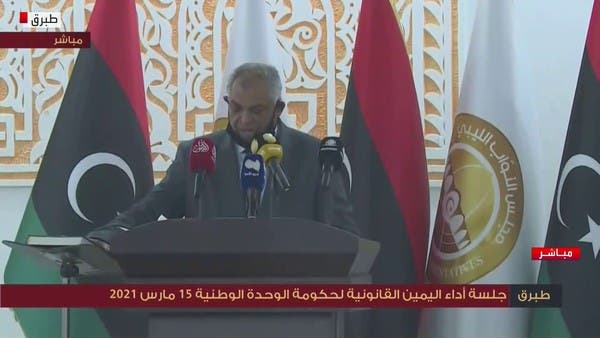 Today, Monday, saw the inauguration session To the unity government of Libya The House of Representatives, headed by Abdel Hamid Tabaiba, faces chaos, neglect and outcry.

In detail, the government official said in his brief address to the delegates: “I swear by Almighty God to fulfill my duties with all sincerity and integrity (September Fateh Revolution) and to be true to the goals. “Fix it again with laughter for the goals of the February 17 revolution.

However, this tongue slip went unnoticed. Instead, the hall was filled with noise and commotion until the session chair quietly listened to the performance of government members to complete the legislative oath.

The government takes the oath

After al-Qadrani, ministers followed the oath, and each time one of them referred to the February 16 revolution, the shouts and applause sometimes came back, perhaps reminiscent of the extent of the mistake the deputy prime minister had made.

The new Libyan Prime Minister Abdel Hamid Tabaiba, who is to manage the interim phase until the elections in December, took office today as part of a political process that will be seized by the United Nations, more than a month after he was appointed. Libya from the chaos that has been going on for ten years. Years.

It came after the Presidential Council took the oath of office this morning before the Supreme Court Constitutional Court at its headquarters in Tripoli.

It is noteworthy that the September Al-Fateh Revolution was led by the late Colonel Muammar Gaddafi on September 1, 1969, while the February 17, 2011 revolution ended his rule and his life.