Home Economy Amazon’s next headquarters will be like this 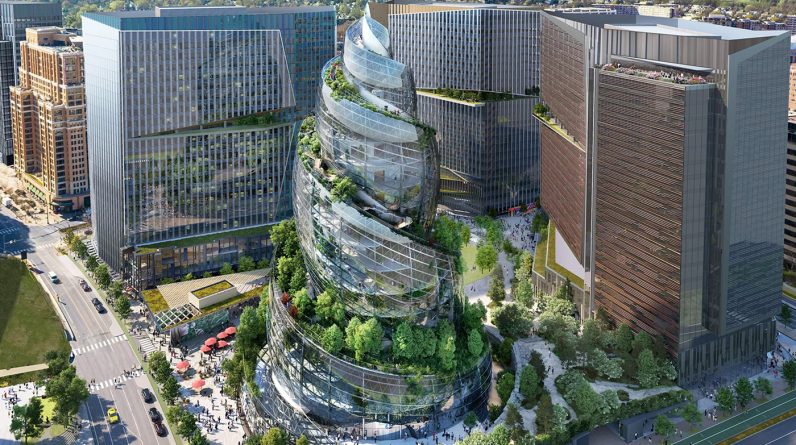 Amazon, based in Arlington, Virginia, used the design of its future headquarters this week. The appearance of these next campuses should be as future as the environment. There are large green spaces around a large helix-shaped tower, named after “The Helix” headquarters. Designed in glass, the latter is more than 100 meters high, with a massive vegetable spiral that climbs to the top.

Amazon wants to open a head office to the outside world

In general, Amazon’s new headquarters will be more than 260,000 square meters, consisting of three buildings, including the famous 22-story “The Helix” building. Throughout the surface, the company provides contacts with nature either through natural light or through the presence of green spaces and plants. It also provides for the establishment of a collaborative and shared space among American company employees.

Amazon prefers to have an opening on the outside and in the neighborhood rather than showing itself as a closed space, so that more than 10,000 square meters of events are open to the public. There may be markets, concerts or places to walk.

The company points out that the initiative will honor the climate pledge charter issued two years ago, with Amazon aiming to achieve carbon neutrality in about 30 years. To do this, the helix will be designed around renewable energies – for heating or cooling. Here we see the same preference of other companies in the technology sector like Apple, whose headquarters are stable and futuristic.

If this project is ambitious for Amazon, The Helix will not see daylight. Construction is expected to begin in 2022 after local authorities verify it. After three years, if there is no delay the head office should start welcoming the staff of the committee.