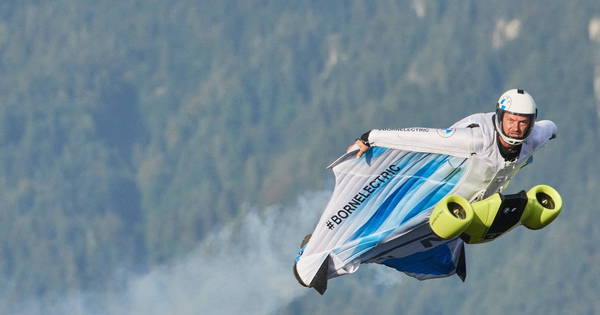 Until now, daring human attempts to fly overhead with artificial wings, which began to gain popularity and began to attract public attention at the beginning of the millennium, resembled the flight of flying squirrels, half-falling and half-skidding, accelerating using gravity and basically down.

But those limitations were left with the first aircraft using an air suit with wings and electric propulsion, which not only increased the altitude, but also allowed it to fly at higher speeds, with longer and better gliding, like a small turbo plane. There are those who consider clothing to be “the dawn of a new extreme sport.”

Selected for the launch of this new individual aerial vehicle was the Austrian professional base jumper and parasotist Peter Salsman, who participated in the design of the system.

Advances in the electric motor, electronic power, charging technology, high voltage batteries and zero carbon dioxide (CO2) emissions used in the BMW electric car range were launched in 2013 with the BMW i3 model and its latest batch of newly launched BMW 3, they are now used in a completely innovative way.

The result was a very powerful, compact and lightweight module for storing energy, steering and torque, which is attached to the pilot’s chest, allowing for a unique flying experience with his electric aerial case.

This ‘Electrified Wingsuit’ or e-Wingsuit power unit consists of two carbon-coated drive propellers capable of rotating at about 25,000 revolutions (RPM) per minute, each with a power of 7.5 kW (kW) and a total of 15 kW. According to him, about 5 minutes is available for the flight.

See also  What did you see first? Select and discover what hides your personality

Technically known as the “aircraft unit” it has an aluminum structure and two propellers, each about 13 centimeters in diameter, resembling a future mini-submarine. It draws its electricity from a 50V lithium battery, weighs about 12kg and is attached to the pilot’s chest using a hinge system.

Is the new game born?

Three years have passed since the idea of ​​creating electric wings to the first plane in the Austrian Alps. At the time, the developers were working together on the details of the suite and the dual-helix electric drive system, which includes an energy-saving unit.

The design of the new suit was inspired by the urge to take Peter Salsman’s extreme sport of ‘Wingsuit Flight’ to another level, using a membrane suit that connects his arms to his body and legs.

The 33-year-old Austrian is a skydiving instructor with basic jumping training, which involves jumping stationary objects into space and parachuting buildings, cranes, bridges or rocks. His review includes acrobatics in films and presentations on shows.

When jumping from a high altitude on the ground or in an airplane, Salesman uses the textile layer of his wings as a paraglider, which allows him to create horizontal flight motion from the speed of the fall and the flow of air.

Parasites, with their wingsuit suits, can reach 3 meters horizontal plane with every meter descent and reach speeds of up to 100km / h, Salesman says.

“The purpose of electric propulsion is to increase the efficiency of the wingsuit to achieve a better stable flight, allowing it to cover longer distances, and once activated, the pilot experiences instantaneous acceleration and allows him to fly at speeds of up to 300 km per hour,” he explains. Salsman.

For the inaugural flight in the electric suite, Salesman flew in a helicopter with two pilots of the same structure on the mountain top of his own Austria.

As soon as they jumped, the three pilots headed for the mountain massif called Tray Brooder or “Tres Irmios” on which they flew spectacularly. See below.

With the help of an electric thruster, Salesman was able to advance faster than his two counterparts and cross the summit in a steep plane, flying over a bend and finding two other pilots leaning around the same mountain.

Finally, the three Wingsuit pilots opened their parachutes and arrived at the agreed location.

Following its successful launch, the world’s first electric-powered wing suit continues to grow, a technology that, according to the Austrians, “will mark the future not only on the road but also in the air, the possibilities never before dreamed of. With the electric wingsuit project ”.