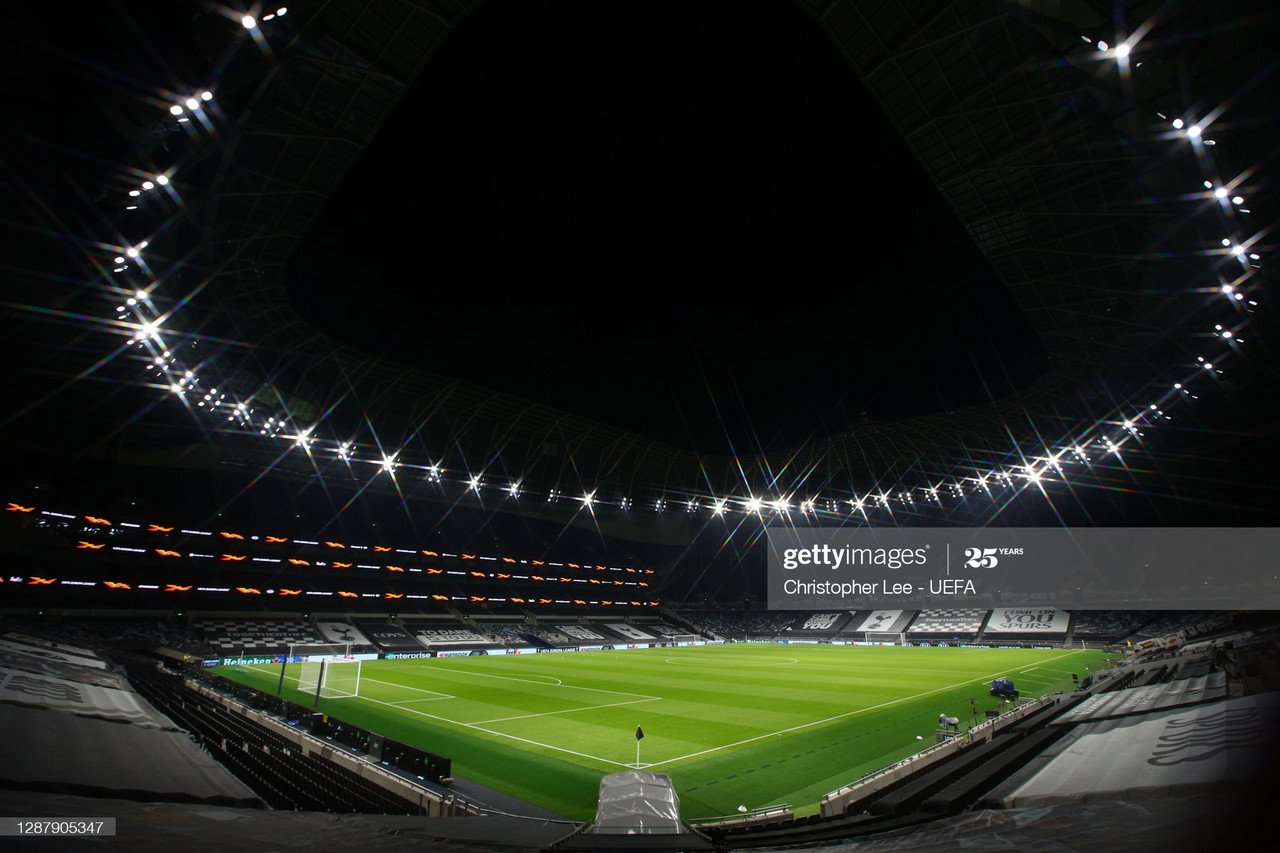 LONDON, ENGLAND – NOVEMBER 26: (EDITORS NOTE – This image has been created using a special effects lens filter) General view inside of the stadium prior to kick off during the UEFA Europa League Group J stage match between Tottenham Hotspur and PFC Ludogorets Razgrad at Tottenham Hotspur Stadium on November 26, 2020 in London, England. Sporting stadiums around the UK remain under strict restrictions due to the Coronavirus Pandemic as Government social distancing laws prohibit fans inside venues resulting in games being played behind closed doors. (Photo by Christopher Lee – UEFA / UEFA via Getty Images)

90 + 1 ‘Almost again for Scarlett as another fantastic move involving him and White sees him trying to cut back across across Vinicius – but it is just too far ahead of them.

84 ‘SO ALMOST FOR SCARLETT! A fantastic ball from Winks for the 16-year-old to chase but his touch lets him down, before he wins the ball back brilliantly to White, who’s shot flashes past the post.

81 ‘TRIPLE SUB FOR SPURS: Hart, Dele and Lucas come off for Whiteman, White and Scarlett.

80 ‘Clarke does really well to hold his man off and find Winks on the edge, but his shot is slightly overcooked and over the bar.

77 ‘The corner was cleared but Spurs come forward again. They aren’t done here. Vinicius’ shot is blocked but the home side regain possession and recycle.

75 ‘Clarke wins a corner on the right hand side for Spurs.

73 ‘Fantastic from Vinicius who I mentioned earlier who now has a brace of goals and an assist, after controlling really well in the box and laying off Lucas who curls his ball into the far corner.

See also  The petition against Covid 19 is causing a scandal
21: 28an hour ago

71 ‘Vinicius wins a foul off Grigore. He has been outstanding tonight.

That is incredible. Winks has caught the goalkeeper off his line from near the touchline opposite where the subs are sitting down. Incredible.

57 ‘Huge chance for Bale after Doherty’s run in behind and header across the face of goal reaches him, but Iliev does enough to stop the Welshman from making it three.

56 ‘And it’s a fantastic delivery from Despadov but not a single man in green commits and the ball runs out of play.

55 ‘An opportunity now for Ludogorets to deliver a cross from a free kick after Tanganga wiped out Ikoko.

52 ‘A yellow card for Ndombele who brings down a man in green who looked to escape on the counter attack. Clumsy, but the first clumsy error from him all day.

50 ‘Almost for Spurs again as Doherty’s cut back to Lucas is out behind for another corner.

49 ‘The corner initially goes all the way back to Winks, but Spurs knock the ball around a little bit to create space, before Winks delivered a neat ball to Dele who couldn’t get enough pace on his header.

48 ‘Corner to Spurs as Davies’ cross is cleared behind.

46 ‘Almost a goal straight away as Lucas curls in a cross towards Bale, the Welshman then heads the ball back towards the far corner but it’s wide and too far for Vinicius to reach.

SECOND HALF KICK OFF: TOTTENHAM 2-0 LUDOGORETS

46 ‘Were back running here as Spurs look for a third.

43 ‘Despodov has been shown a yellow card for leading with his arm into an aerial challenge with Ben Davies who is still on the ground.

41 ‘The corner is swung in deep towards Doherty who cannot get a proper connection at the back post and Ludogorets will have a goal kick.

36 ‘Almost a third for Spurs as Lucas manages to get in behind but his shot on the bounce flies well over the bar.

34 ‘Very unselfish from Dele Alli to slide the ball across for Vinicius to tap home after Ndombele’s fantastic solo run and shot forced a save from Iliev.

25 ‘Comical moment there as a Ludogorets forward throws their foot high into the air to challenge for the ball, but Tanganga throws his head into the boot and the ball, winning it fairly but the Bulgarians are claiming for a free-kick.

23 ‘Only a matter of time now until Spurs get their second, and it must be said that Ndombele looks incredibly sharp as he continues to toy with the Bulgarian side.

21 ‘Vinicius almost turns provider as he lays the ball off for Bale who’s strike nearly finds the top corner but is fractionally too high.

20 ‘Bale attempts an early cross for Lucas, but the ball is cleared as Spurs continue to press relentlessly.

20: 182 hours ago
See also  Unusual, ATP> Medvedev: "In the United States, when I'm in a restaurant eating spaghetti, people point fingers at me and shout my name. That's bad."

17 ‘Vinicius grabs his first goal for Spurs! It’s a composed finish from the Brazilian who gets on the end of Dele’s deflected through-ball attempt and slots home.

14 ‘Vinicius holds off his defender and lays off Dele who doesn’t catch his strike in the way he would want and Ludogorets survive once again.

13 ‘First sniff of goal for Vinicius who brings Lucas’ ball down in the box but his strike is miscued and goes well wide.

11 ‘Bale’s free kick strikes the wall and is deflected just over for a corner.

11 ‘Free kick on the edge on the area for Spurs after Ndombele draws a foul.

10 ‘Doherty’s cross is met by Bale but his header has not got enough power or direction to cause any trouble.

5 ‘The Bulgarian side cannot get out their own box at the moment, but still no chances yet.

2 ‘Ndombele straight away has got Spurs off on the right foot with a few neat turns. Spurs in control from the start here.

1 ‘We are running here at the Tottenham Hotspur Stadium!

The teams have walked out onto the pitch and we are almost ready to kick-off.

HALF AN HOUR UNTIL KICK OFF

Let us know your score predictions by tweeting me @ Dan_H26!