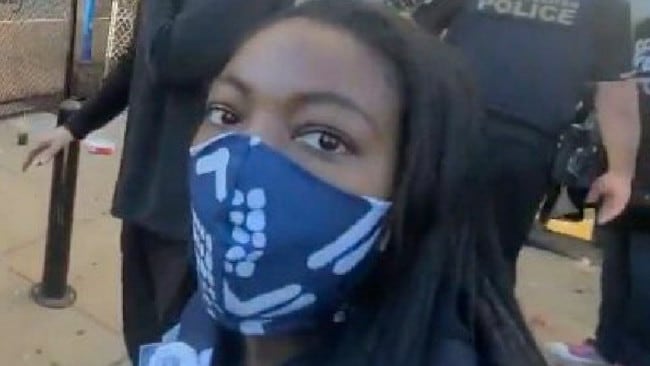 A Black Lives Matter protester who was caught videotaping supporters of President Donald Trump during Saturday’s “Million Maga March” event is said to be a student at Howard University.

In one incident, McLister allegedly kicked an unconscious man who was knocked out by 39-year-old Kenneth Wayne Debury.

Mr Debury is one of four in the city’s Metropolitan Police He was arrested for disorderly conduct.

It is reported that McAllister has not yet been arrested For the latest newsletter From the field.

Mr. Trump He then retweeted the video.

In another clip, McAllister appears to be running and punching The woman at the back of the head. She runs in the opposite direction.

However, that tweet was later deleted and McAllister’s accounts have been disabled.

Although the march was relatively quiet for the first few hours of the demonstrations, Protesters clashed with several Among the thousands of marchers in the afternoon.

Twenty-one people were eventually arrested for various crimes, including Assault and possession of weapons, Officials said.

Two officers were wounded and several guns were recovered.

Reaction on Twitter, The President He advised police officers not to “retreat.”

“The antifa scam ran into the mountains today when Trump tried to attack people at the rally because those people fought aggressively,” he wrote. ”Antifa waited until tonight, when 99% was gone, to attack the innocent #MAGA people. DC Police, go – do your job, don’t back down !!! ”

Mr Trump attacked Democratic Mayor Muriel Bowser, he said She “didn’t do her job”, And accused the media of being “silent”.

This article first appeared Fox News And re-created with permission