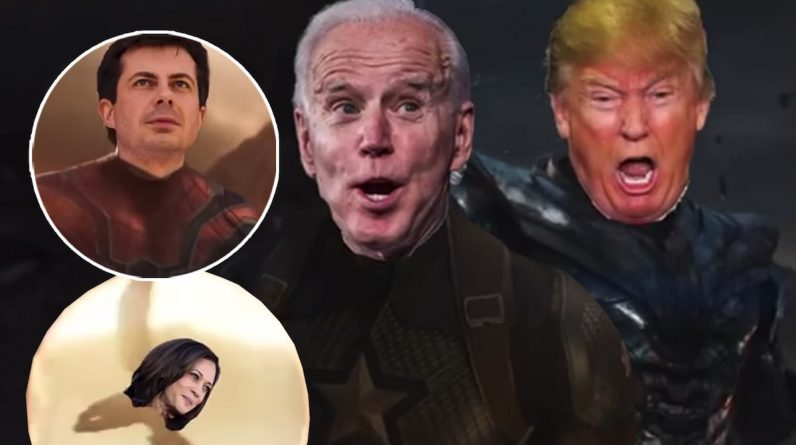 Some found the clip completely ridiculous, while others acted with enthusiasm.

It’s screaming at the truly brand new fan revision of the climax of “Avengers: The Endgame”, which was dropped online today with an election twist.

These scenes show the final confrontation between Joe Biden’s Captain America and Donald Trump’s Thanos, and Cape gets the much-needed backup from every imaginable Avenger at the last second.

Facebook is waiting for your permission to load the video.

Stepping in for Anthony McKee as the Falcon is Kamala Harris, whose “sorry, Mr. Vice President, I’m talking” is heard in Biden’s ear piece before Dr. Strange’s websites start opening around him.

In the cameos: Bernie Sanders as Dr. Strange, Peter Parker as Pete Patrick as Spider-Man, Corey Booker, Elizabeth Warren and Peto O’Rourke as Defenders of the Galaxy, Alexandria Occasio-Cortez as Captain Marvel, and Nancy Belos as Klitschko as Wasp.

A few politicians, including John Lewis, Ruth Bader Ginsburg and John McCain, give out post-ballots and, randomly, Sean Connery.

Like we said, it’s ridiculous, but that doesn’t stop it from being shared like crazy on Twitter – some stars have shared it with so much emotion, others have fun. It also received love from the Hulk, Mark Rufallo.

See some reactions below:

Let’s see the karma out of this movie. There may have been an emotional ending … https://t.co/WyZUNnkaqF

I do not know who did this, but take a bow

I thought it might be beautiful, but in reality it is incredible. https://t.co/POAddRoJIy

Om it is beautiful! Tweets see this, but I get the most emotional tissue! O Joypitan Ama Kamalaharis Our heroes! https://t.co/kb2qdfY79Y

OK. I really enjoyed this. https://t.co/p5FH8RwrtB