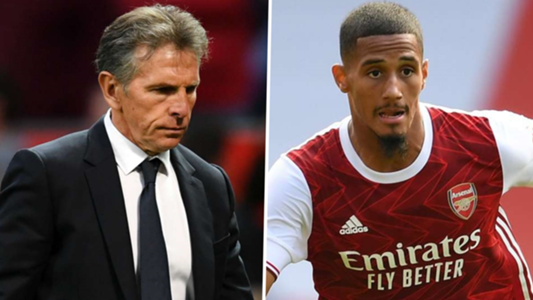 The 19-year-old faces an uncertain future in north London

Saint-Etienne head coach Claude Storm has slandered Arsenal for treating William Saliba after a defender was sacked from the team’s Europa League squad.

Arsenal signed $ 27 million ($ 35 million) in the teenage center-back from Saint-Etienne last year, before borrowing him back to the LQ1 side for the 2019-20 season.

When he returned to Arsenal earlier this season, Saliba’s chances of playing the game were in doubt, and the Gunners tried to find a loan solution for the 19-year-old.

Another loan was proposed to Saint-Etienne, but the move collapsed at the last minute, which led to the frustration of the Ligu 1 page.

The Gunners negotiated with championship clubs, including Brentford, to lend to Saliba, but that potential move also collapsed.

Facing an uncertain future with the North London club has left Saliba relaxed, still waiting for his Gunners debut.

Arsenal have been frustrated by Arsenal’s hostility to Saliba, fearing that the club’s short – term strategy could cause real damage to the teenager’s long – term development.

“It simply came to our notice then [thinking], Even for a young player, “Storm said Team. “A great player like William, I want the best, was not even on Arsenal’s Europa League squad. Where is the logic if there is no funding?

“He was very willing to join us. The club is like family and friends [to him]. His adaptation would have been immediate.

“This would have happened if all the conditions had been met. This must be consistent with our finances and his contract, especially with management.”

Earlier this month, Arsenal manager Michael Arteta explained that injuries and a corona virus-compressed season were Saliba’s 2019-20 campaign that neither he nor the Gunners expected.

“He had a year last year, where Arsenal lent him to Saint-Etienne, and it was a change year for him,” Artetta said.

“He needs a change that year. We’re trying to make the right decisions to give him the best interim year to have the player we want in our future.”