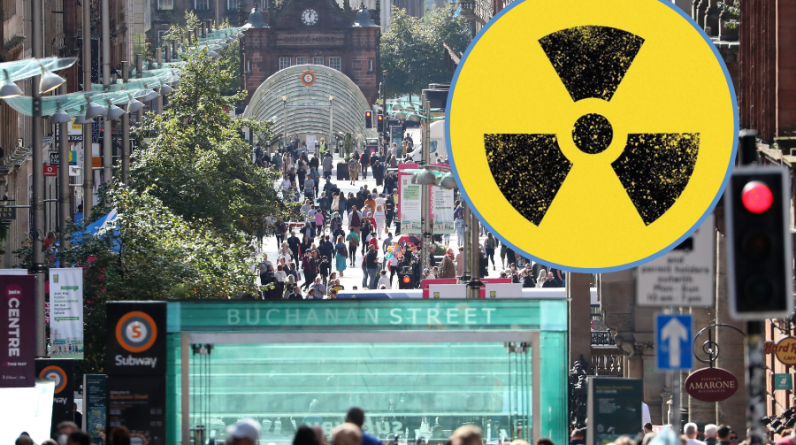 A graph reveals the hotspots of radioactive gas in Glasgow.

Radon is formed by radioactive decay from small amounts of uranium found naturally in all rocks and soils.

It is colorless, odorless and tasteless, but it is found everywhere.

However, the UK government says “every building has radon, but in general the levels are low”.

And “Opportunities for higher levels depend on the type of floor.”

Radiation from organs can increase the risk of cancer.

The UK government has released a map showing where the highest levels are.

The darker the color, the higher the chance of elevation. Chances are one-hundredth of a house in white areas and one-third of homes in dark areas.

Areas around the city center and west end of Glasgow have been identified as hotspots, which extend over most of the area across the Clyde River.

Similarly, hotspots in and around Drumshop have been identified and the Maryhill area has also been affected.

To the south, numerous areas are marked near Pollock Country Park and Queens Park.

What is Radon Gas?

Radon is a naturally occurring radioactive gas that we cannot see, smell or taste.

This gas is formed by the radioactive decomposition of small amounts of uranium that occurs naturally from rocks and soil.

Why is this a risk to our health?

They emit radiation as the radioactive elements decompose. Exposure to radiation is dangerous to our health as it can cause damage to living tissues and increase the risk of cancer in humans.

Where is it found?

Radon is found everywhere as it is formed from uranium in all rocks and soils.

Why is radiation harmful?

We are all exposed to radiation from natural and man-made sources, but can inhale the radioactive elements generated by the decay of radon and enter our lungs.

Once inside our lungs, these components constantly decompose and emit radiation, which is then absorbed by nearby lung tissue and causes localized damage.

Studies show that overexposure to radon increases your risk of lung cancer.

See also  They addressed the Russian oligarchy: head to space!