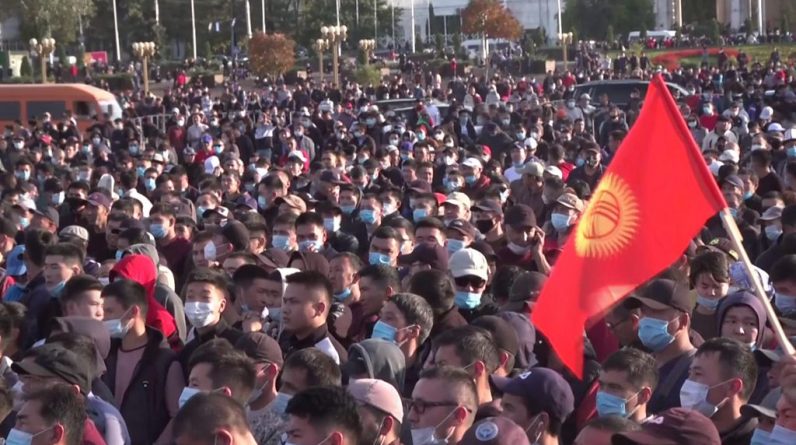 Protesters in Kyrgyzstan have broken up parliament in the capital, Bishkek, demanding the cancellation of the country’s parliamentary elections.

The footage showed people throwing papers from the windows of the building, while others could be seen entering the office of President Surabaya Zinbekov.

The wreckage one day continues clashes with police, who initially dispersed people with water cannons and tear gas canisters.

The clashes came amid allegations of voting in last Sunday’s election.

Following the referendum, only four of the 16 parties exceeded the 7% threshold for entry into parliament, three of which have close ties to President Jean-Pique.

On Monday, police used stun grenades to chase thousands of protesters in nearby streets in Ala-Du Square.

About 120 people are said to have been injured, half of whom were law enforcement.

Many are in critical condition, but no deaths have been reported, the health ministry said in a statement.

Groups close to the president have been accused of vote-rigging and voter intimidation – which international observers say is “credible” and a cause for “serious concern.”

On Monday, 12 opposition parties announced that they would not jointly approve the results of the vote.

Later, President Zinbekov’s office said it would meet with the leaders of the 16 parties that contested Tuesday’s election in an effort to defuse tensions.

One candidate, Riskeldi Mombekov, told a crowd of more than 5,000 protesters on Monday: “The president has promised to oversee fair elections. He has not kept his word.”

Mr Mombeko’s party, Atta McCann, was hoping to get into parliament, but in the end it was one of eight. Atta McCann leader Janar Akew was injured in the leg during Monday’s protests.

Protesters have called for the resignation of President Jean-Pierre.

Thomas Boserup, head of the Organization for Security and Cooperation in Europe (OSCE) election monitoring program, told a conference that although the referendum was “generally organized”, vote-buying allegations were a “serious concern”.

How the protests escalated

They initially used force to disperse protesters in Main Square, but as crowds in Bishkek moved to other streets, police continued to pursue them.

Reports of injuries began to emerge – among protesters and police. Janardhan Akew, an opposition leader, was among those injured.

About 5,000 people protested in Ala-Du Square, and the demonstration was largely peaceful. But at about 20:10 (14:10 GMT) local time, a small group of protesters broke up and marched on the so-called White House building. When they got there, they reportedly tried to break down the gates.

This is what prompted the police response. Police said they would not interfere in the protests as long as they remained calm – but this was seen as a provocative act.

The protesters initially dispersed, but later returned and successfully entered the parliament building.

The two leading parties, which received a quarter of the vote each, were Primitik and Mekhanim Kyrgyzstan.

Meanwhile, McKenzie appears to be closely associated with the powerful Matrimov family of Kyrgyzstan. The head of the family, Ryambek Matrimov, was the target of anti-corruption protests last year and is believed to have helped finance Mr Jinpeko’s successful presidential campaign in 2017.

Late on Monday, Primitik announced that it was ready to hold a re-election on Sunday, and called on other parties to do the same.

See also  When are the US election results and exit polls, and when will we know the winner of the 2020 presidential race?