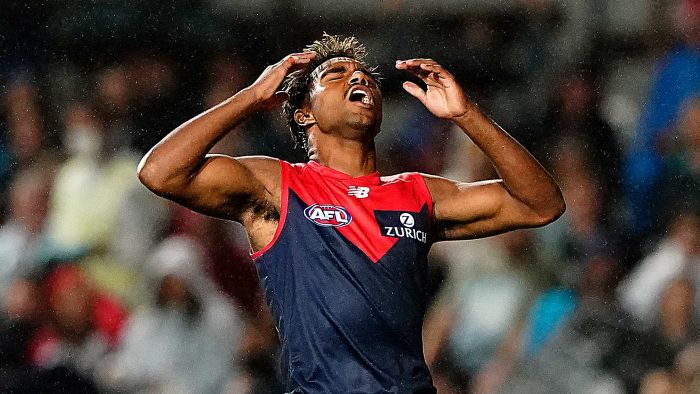 The Melbourne Giants have snatched a golden opportunity to enter the top eight of the AFL as they were reduced to 4.9 (33) by 6.11 (47) in Fremont.

Then The Bulldogs advanced to ninth place by beating the West Coast on Sunday, Had a chance to go to a better place and advance to the eighth place – tied with 32 points with the Dogs and Giants – beat the Tokers.

But the rain in Cairns helped narrow any gap in quality between the two teams and created a thin affair.

Thanks to a small area for slippery conditions, only two goals were kicked in the first half, with a big one and a nine kick back in Fremond.

After a long break the rain subsided and kicked 5.2 in the third and fourth quarters, improving their accuracy as they kept the monsters arm-length for most of the night.

Michael Walters kicked half of the Dockers’ goals into the night, while four ghosts Bailey Fritch, Jayton Hunt, Aaron van den Berg and Sam Wheatman each scored a crucial point.

In every statistic category Melbourne was below its seasonal average, with one of the most obvious differences in removal efficiency: 53.3 per cent at night, compared to 71.2 per cent per annum.

Fremont are now 13th on the ladder and Melbourne 10th.

Making a final even lower is a game in the hands of the GWS, with only 15 of the demons playing 14.

The Giants will try to keep some distance between themselves and the Chasing Pack by beating last-placed Adelaide on Tuesday.