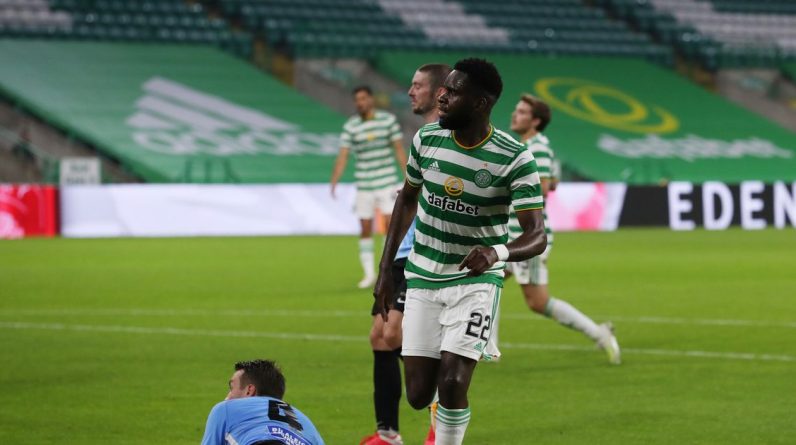 Celtic striker Odsonne Edouard is set for crucial talks over his future after the Hoops crashed out of the Champions League.

The Frenchman sat out Wednesday’s dismal qualifying defeat to Ferencvaros with a niggling thigh injury and was sorely missed as his side were made to pay for failing to capitalise on their domination.

Now Edouard, who has two years left on his deal, will speak with his representatives in the coming days with speculation mounting and just over five weeks of the transfer window remaining.

Celtic yesterday completed the £3.25million signing of David Turnbull from Motherwell and are intent on convincing Edouard to stick around for at least another year in Glasgow.

But while Champions League football isn’t the ball-all and end-all for the 22-year-old, those close to him suggest it is very important. As is the chance to go down in history as a 10-in-a-row champion with Celtic.

Those two incentives will be high on the agenda when Edouard holds key talks with his advisors.

Celtic opened discussions in the summer over a new contract for the man they splashed out a record £9million to sign from PSG in 2018.

And his agent Lasana Koita told Record Sport: “Odsonne is happy at Celtic and enjoys life in Scotland.

“He is disappointed with the result on Wednesday especially as he was injured and could not play. I think the goal was certainly to qualify for the Champions League. That is football.

“I will speak with him.

“It is not crucial for Odsonne to be playing in the Champions League but it is important.

See also  Clemson's Justyn Ross comes out for the season

“We are going to wait because there is still a target for Celtic. There’s the Europa League and to go for 10 titles.

“Ten titles is important for Odsonne.

“We don’t know what will happen. For now he is with Celtic. We don’t discuss with any other team for now.”

Aston Villa are among a list of clubs who have been linked with Edouard while Brendan Rodgers, who signed him for the Hoops after a successful loan spell in Paradise two years ago, is known to be keen on a reunion.

His representative added: “I heard of the interest from Aston Villa, I read it in the newspaper, and I think it’s true. But we have not had any contact with Aston Villa right now.”

Celtic have not given up hope of the striker, who has scored 66 goals in 130 appearances, signing a new deal.

Speaking in June, Neil Lennon confirmed talks had began with the Frenchman over an improved contract as he looked to convince him to stick around for “at least another season”.

Meanwhile, Turnbull has set his sights on silverware after arriving as Lennon’s fourth summer signing in a deal worth a record £3.25m to Motherwell.

It brings to an end a painful 14-month wait for the Scotland U21 star whose move to Parkhead collapsed at the final hour last summer when a medical found a problem in his knee.

Turnbull described the injury as the lowest point in his life. But after returning to action and hitting the ground running for Well in the new campaign the midfielder says he can’t wait to get started for the Hoops.

He said: “I’m absolutely delighted to join Celtic, especially after everything that’s went on over the last year.

“To join the biggest club in Scotland, I’m just delighted. Looking back, the injury was the worst time of my life, really.

“It was so hard to take, but I knew that if I worked hard, kept my head down, the chance could come around again, so long as I stuck to it. Now, I can’t wait to get started.

“The success of Celtic in recent seasons has been incredible. They’ve been so consistent as well, which is the root of their success.

“I’ve played in the first five games of the season, I’ve managed to get a goal, I feel really fit and I’m just raring to go and make my mark here at Celtic.

“It’d be brilliant to win silverware this season at Celtic. I obviously grew up playing with Motherwell, and while we were involved in cup finals, there was maybe less of an expectation to get there.

“It’s the opposite at Celtic, so to be involved in big games, tournaments and cups would be an honour for me and my family. I can’t wait to do whatever I can to help Celtic win more trophies in this important season ahead.”