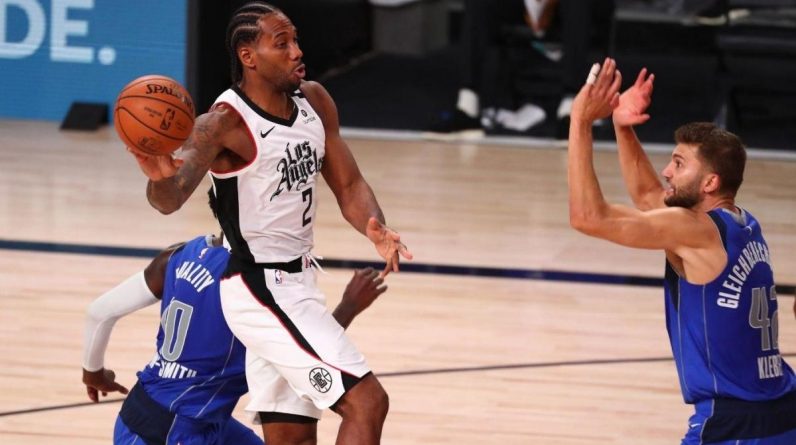 After four close games between the Los Angeles Clippers and Dallas Mavericks, the favorite finally found some separation on Tuesday. The Clippers absolutely decimated the Mavericks, 154-111 to take a 3-2 lead in the series. More importantly, they got many of their struggling players back on track. Paul George and Montrezl Harrell combined for 56 points, and the team as a whole hit 22 3-pointers to not only take the lead in the series, but to send a statement to the underdog Mavericks that, despite the series so far, these teams are not close to even.

The Mavericks, meanwhile, have to go back to the drawing board after one of their worst losses of the season. Nothing worked defensively in Game 5. The offense struggled nearly as much. They now have two days to come up with a counter. If they can’t, their season will end on Thursday with a Game 6 loss.

1. Playoff P has entered the chat

Paul George committed one of sports’ cardinal sins when he gave himself “Playoff P” as a nickname. It’s one thing to struggle in the postseason, but it’s another when you’ve gone out of the way to tell the world how dominant you are there. The jokes flowed like wine as he shot 10-of-47 from the field in Games 2-4 of the Clippers’ first-round series against the Dallas Mavericks. Well, nobody’s laughing now.

George left the game with 35 points in the fourth quarter, the Clippers leading by 32. He shot 12-of-18 from the field and 4-of-8 on 3-pointers. This is what the Clippers need George to be offensively. He’s not going to run the system, but he has to make the shots that are generated by it. He’s a flow player that struggled to find any sort of rhythm over the past three games. With the Clippers firing on all cylinders and the Mavericks completely ill-equipped to defend them, George should be able to carry some momentum into the second round.

2. Luka Doncic is out of gas

Few players can disappoint with a 22-point, eight-rebound and four-assist performance, but that is the bar Luka Doncic has set for himself in this series. More distressingly, he shot only 6-of-17 from the field. He missed five free-throws and five of his six 3-point attempts. The Clippers are responsible for that to an extent. They trapped him in pick-and-roll far more aggressively than they had earlier in the series after their switching failed miserably.

But physically, Doncic just wasn’t close to 100 percent. He played on a sprained left ankle in Game 4 and was wonderful in orchestrating an overtime upset, but whether he was simply tired or if playing aggravated the injury, he spent the night wincing as he failed to keep up with stellar Clipper defense. The Mavericks never expected to win this series, especially with Kristaps Porzingis missing so much time. But after four games, they had a very real chance to advance. If this is what Doncic is going to look like, though, that chance is gone. He isn’t healthy enough to beat the Clippers.

3. Montrezl Harrell is finally coming around

The raw stats are impressive, but don’t tell the whole story. Montrezl Harrell has largely been a non-factor in this series. The Clippers were outscored by 46 points in his minutes during the first four games. As much as they like the 19 points and 11 rebounds, they’re far more concerned with his point-differential of plus-34.

Harrell wasn’t nearly conditioned for playoff basketball when this series began. He still has room to grow, but physically, the difference has been stark. He’s capable of making the sort of effort plays that define his play as much as his offense. The Clippers can get by offensively without Harrell. But the emotional lift he provided with his energy was irreplaceable. It was unmistakably present in Game 5, and that should terrify the Western Conference