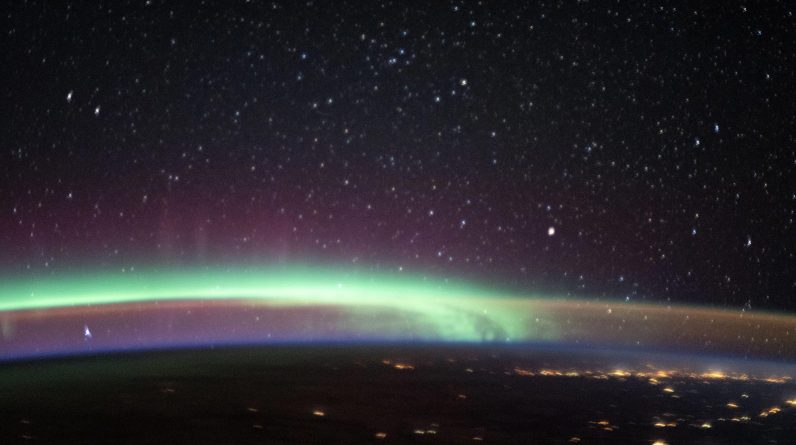 Two of Earth’s most vibrant higher atmospheric phenomena, aurora and airglow, satisfied just just before dawn in this photo shot by an astronaut on the Global Area Station (ISS). Wavy inexperienced, crimson-topped wisps of aurora borealis look to intersect the muted pink-yellow band of airglow as the ISS handed just south of the Alaskan Peninsula. The rising Solar, guiding Earth’s limb at the time of this image, adds a deep blue to the horizon. Light from towns in British Columbia and Alberta, Canada, joins starlight to dot the early morning skyscape.

While they show up at related altitudes, aurora and airglow are produced by different physical procedures. Nighttime airglow (or nightglow) is a type of chemiluminescence—the emission of gentle from chemical interactions in between oxygen, nitrogen, and other molecules in the upper atmosphere. Airglow happens all about the Earth, all the time. Nevertheless, “nightglow” is considerably much easier to spot over a darkish Earth than “dayglow,” as airglow is just just one billionth as vibrant as the Sun.

Auroras, on the other hand, stem from interactions among photo voltaic vitality and Earth’s magnetic industry. The magnetic subject funnels the electrical power into the upper ambiance, where it interacts with the same atoms as airglow (mainly oxygen and nitrogen). This is why the two phenomena can produce identical hues. The dynamic character of Earth’s magnetic subject moves the photo voltaic electrical power in irregular ways, resulting in each and every aurora party to be visually unique.

Recently, the Earth Science and Remote Sensing Unit at NASA’s Johnson Area Centre employed equipment understanding to establish all of the photographs that astronauts have taken of auroras around the past few decades. Lookup the Gateway to Astronaut Photograph of Earth databases for “aurora” to see far more than 270,000 photos of these magnetic marvels.

Astronaut photograph ISS062-E-98264 was obtained on March 16, 2020, with a Nikon D5 electronic digital camera employing a 50-millimeter lens and is provided by the ISS Crew Earth Observations Facility and the Earth Science and Distant Sensing Device, Johnson House Center. The impression was taken by a member of the Expedition 62 crew. The image has been cropped and improved to make improvements to contrast, and lens artifacts have been taken off. The International Place Station Software supports the laboratory as portion of the ISS Nationwide Lab to assistance astronauts just take shots of Earth that will be of the greatest value to scientists and the community, and to make those people illustrations or photos freely readily available on the World-wide-web. Added photos taken by astronauts and cosmonauts can be seen at the NASA/JSC Gateway to Astronaut Pictures of Earth. Caption by Alex Stoken, Jacobs, JETS Deal at NASA-JSC.