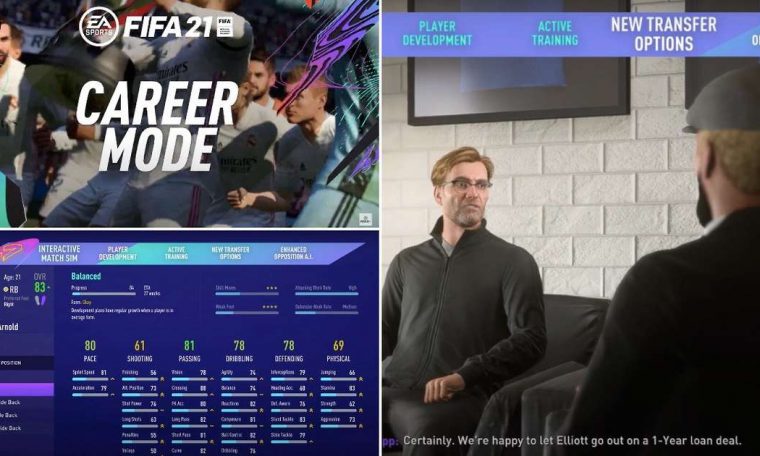 EA Sports have dropped the trailer for FIFA 21’s Career Mode – and it looks incredibly exciting.

There are a whole host of new features which FIFA have revealed in detail in their ‘Pitch Notes’ on the EA website.

EA vice-president Nick Wlodyka didn’t hide the fact they had given Career Mode plenty of attention ahead of the game’s release on October 6.

“We’ve really made the biggest investments we’ve ever made to make sure we’re delivering exactly what our players are asking for. We’ve had so much feedback over the past few years from our players wanting to see more things they can control in career mode.

“We listened to what they want to be able to do, things they haven’t been able to do in the past.”

As we mentioned, you can check out an in-depth look at all of the new features for Career Mode in FIFA 21 HERE.

But we’ve picked out some of the most interesting aspects:

“Interactive Match Sim is a new way to experience matches in Career Mode. You can now take a step back from the traditional gameplay and focus on the bigger picture. Interactive Match Sim enables managers to adopt a more tactical and faster-pace approach to matches, making all-important decisions from the touchline and watching their impact on the pitch from a top-down view.

“In the Interactive Match Sim, the match plays out at twice the speed of regular gameplay. Out of play match moments are automatically skipped, ensuring that you’re always looking at meaningful events.”

Instantly Jump In Or Out

“The Interactive Match Sim allows you to jump straight into action at any given moment, giving you a traditional gameplay experience.

“Whether you only like to intervene when your team goes down, or you prefer to jump in whenever your team is within shooting range, the Interactive Match Sim allows players to experience matches exactly how they want to. You can also jump back out of gameplay and watch the rest of the game play out in Interactive Match Sim or skip straight to the final result at any time.”

See also  End to rumors: Netanyahu has released his iPhone

“Whenever you’re inside the Interactive Match Sim, you see the players attempt to implement your Game Plans and have all the tools needed to reorganize them on the fly if needed. You can interact with Team Management, change Game Plans, and monitor your team’s and your opponent’s information in real-time. The following tabs are available:

“Developing a solid and diverse squad that is fit to take you to glory is an integral part of the manager experience and we are aware in the past this could rely more on transfers than squad growth. With the new Player Development feature, a fully revamped player growth system, we are now enabling you to grow your squad and make the most of it when possible.

“Players can be developed and specialized in various roles based on their playing position, and the attributes that best fit your style of play improved upon. Whether you favor playing out from the back, possession, or fast counter-attacks, you can instruct your players to focus their growth in the direction that you want.

“Player growth is determined through XP accumulation. Based on how well they do in matches (their Form) and their potential to grow, they will gain more or less growth XP. That XP is distributed to their Attributes, determining Attribute growth over time. By default, all players are placed on a Balanced Plan, meaning that the XP is distributed evenly to all Attributes. When setting a custom Development Plan for each position as Active, you can choose a set of player Attributes and features to get all XP growth. Rather than “wasting” XP on Attributes you’re not interested in, the growth plans focus that XP towards:

“Much like in real life football, the speed at which players develop depends on their age, abilities, potential, form, and playtime. Give a young player with great potential a few games and help him perform, and he will turn into a better player at an accelerated rate. Keeping him on the sidelines for too long can have the opposite effect, so it’s up to you to make the decisions that work best for your team.”

The modern day transfer market has been going through some changes in recent years and we wanted to better reflect that in our game. Here are 3 improvements we made in this area:

“Within the setup of a new Career Mode save you can set the amount of cash you want your club to receive as part of financial takeover. Whether you want to give your club a whopping 500 million or start with next to nothing, you can customize your experience how you want to.”

“We’ve made some changes to Board objectives to make their requirements more clear, especially around the Brand Exposure objectives. We’ve replaced the objectives around match attendance and season tickets with milestones that the fans would love to see in a club. These milestones include reaching a certain amount of wins in a season, a winning streak at home, a run of unbeaten games away, and many more. We’ve also changed the requirements to give youth players playtime to two seasons in order to make sure there’s plenty of opportunities.”

“We’ve made a number of improvements to our Match Broadcast experience, focusing on immersion and authenticity. Some of these improvements include:

Authentic Goal music – This applies when playing at home and scoring. Some of these include:

New localized stadium announcers – Playing in different countries across Europe will feel more authentic as the intro and specific moments in gameplay will include local flavor for the following languages: