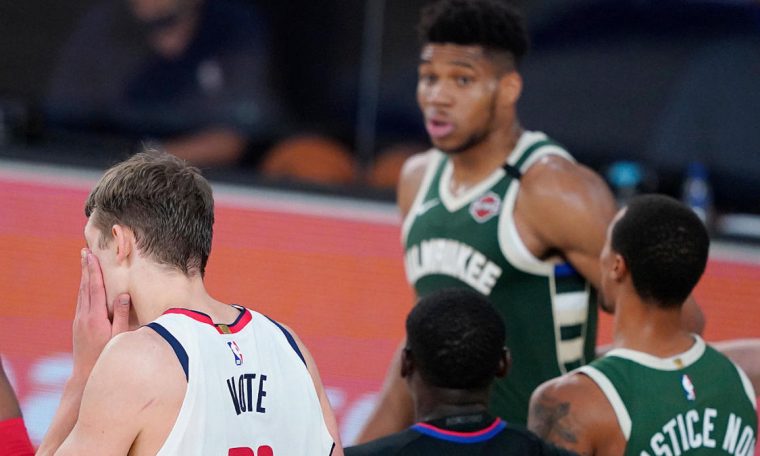 Giannis Antetokounmpo let his emotions get the best of him on Tuesday as his Milwaukee Bucks took on the Washington Wizards. In a tense second quarter in which he had been fouled several times, Giannis finally lost his temper after a charge call. The Bucks called timeout, but Antetokounmpo, in his frustration, delivered a headbutt to Wizards big man Moe Wagner. He was called for a flagrant-2 foul and ejected.

After the game, Antetokounmpo was remorseful in his actions when speaking to the media.

“Terrible action,” Antetokounmpo said. “If I could go back and turn back time and go back to that play, I wouldn’t do it. But at the end of the day, we’re all human, we all make mistakes. I think I’ve done a great job all year, in my career, of keeping my composure and focusing on the game, but like I said, we’re human, we make mistakes. But at the end of the day, learn from it, keep playing good basketball and keep moving forward.”

In relation to why he reacted that way, the reigning MVP said that he was responding to what he felt was a build-up of emotion over the course of the game. While Wagner received the brunt of Antetokounmpo’s frustration, he wasn’t necessarily angry with him.

“I don’t think I was frustrated with Wagner,” Antetokounmpo said. “I think it was just the whole, like, build-up of dirty plays in my mind. Guys tripping me, guys falling in front of my feet, holding me, hitting me. It wasn’t just — I don’t have nothing against Wagner, it wasn’t just him.”

The ejection was the third of Antetokounmpo’s regular-season career and fourth overall. Based on historical precedent, Antetokounmpo is likely to draw a one-game suspension for this headbutt. Hasheem Thabeet (2013) and Kevin Garnett (2015) both headbutted opposing players and were suspended for their team’s next game. Milwaukee’s next game comes against Memphis as the Grizzlies desperately try to fight their way into the play-in tournament for the Western Conference’s final playoff spot.

Milwaukee has nothing to play for having long-since clinched the No. 1 seed in the Eastern Conference, so losing Antetokounmpo for a game would have no bearing on their playoff future. But the Bucks have struggled to get into a rhythm in Orlando due to a combination of rest- and coronavirus-induced absences. They will have a relatively easy first-round series against the Magic in which they can hopefully regain the momentum they’ve lost, but after that, they will have to win three very difficult series against fellow contenders.

Now Antetokounmpo loses, at the very least, the rest of this game as a tune-up. He may not play again until the postseason. The Grizzlies didn’t exactly need this win, but getting him those minutes on the court would have been valuable. Now? They are that much closer to entering the playoffs with unnecessary rust.