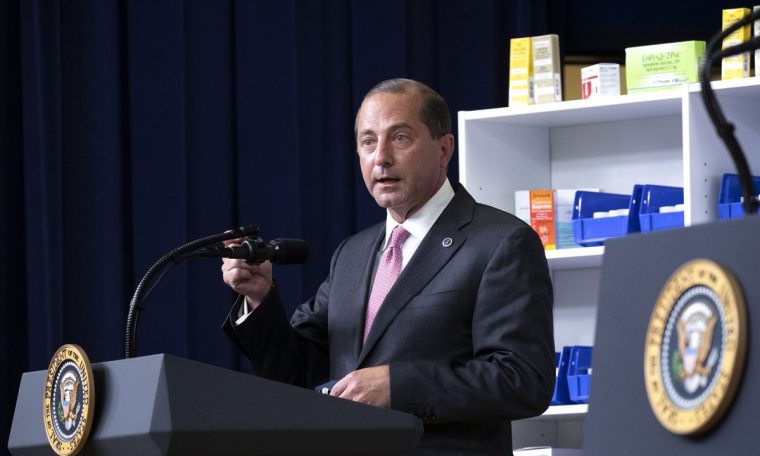 Health and Human Services Secretary Alex Azar will arrive in Taiwan on Sunday for the highest-ranking visit by a U.S. official to the island in decades, a trip that stands to further worsen spiraling relations between the U.S. and China.

Azar is set to discuss the international response to the coronavirus, along with supplies of medical equipment and technology, according to a statement last week from the Department of Health and Human Services. Azar said he would underscore “our shared belief that free and democratic societies are the best model for protecting and promoting health.”

The U.S. official is expected to meet President Tsai Ing-wen on Monday morning, a person familiar with the arrangement said Sunday.

Taiwan has been a rare global success story in containing Covid-19, as the U.S. grapples with one of the world’s worst outbreaks. In keeping with the democratic island’s stringent anti-virus procedures, Azar’s delegation will abide by measures including testing negative for the illness before departure and again when arriving in Taiwan, undergoing mandatory daily temperature checks and wearing masks at all times.

The visit has drawn China’s ire as the U.S. challenges Beijing on a range of fronts, from the early handling of the virus to trade and a new security law for Hong Kong. Chinese Foreign Ministry spokesman Wang Wenbin said last week that Beijing was “firmly opposed” to official interactions between the U.S. and Taiwan and that it had “lodged stern representations” to American officials. He called Taiwan “the most important and sensitive issue in China-U.S. relations.”

“Azar’s visit will be the highest-ranking U.S. official visit in decades. It is clearly a signaling device — the ‘public health/Covid’ cover story is transparently nonsense,” Jonathan Sullivan, director of China programs at the Asia Research Institute and an associate professor at the University of Nottingham, wrote in an email. “It is about sending a message to Beijing amid rapidly deteriorating bilateral relations and the routine military nuisance that Beijing has been causing Taiwan throughout 2020.”

Taiwan’s Foreign Ministry hit back at China’s criticism of the visit on Thursday, calling Beijing a “global troublemaker.”

“What the Chinese government can do is stop making irresponsible remarks on the international stage and stop interfering with Taiwan’s foreign exchanges,” ministry spokeswoman Joanne Ou said at a briefing Thursday. “What the Chinese government can do is ‘return politics to the people, listen to the voices of the people, and understand the needs of the people’ because the 1.4 billion people of China and Hong Kong deserve freedom.”

— With assistance by Jing Li

Before it”s here, it’s on the Bloomberg Terminal.