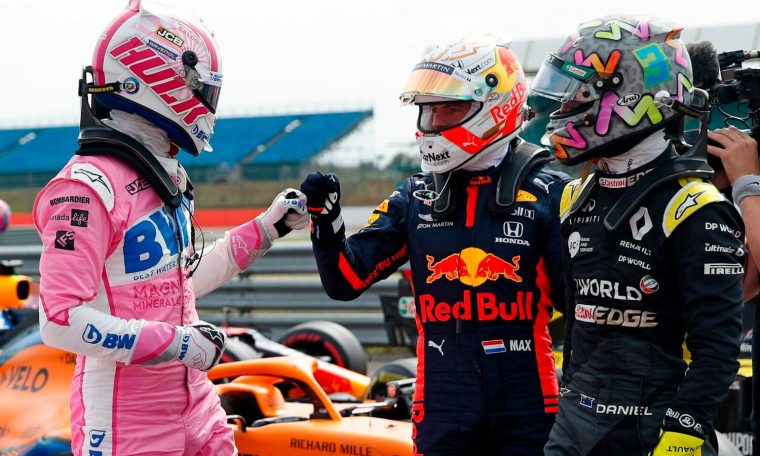 “He should have been already on the grid normally and I hope that this will give him a seat for next year,” says Red Bull’s Verstappen after Hulkenberg qualifies a stunning third at Silverstone

Nico Hulkenberg’s starring role in qualifying for F1’s 70th Anniversary GP has been praised by  pundits and rivals alike after Racing Point’s ‘super-sub’ truly lived up to the title.

In his second qualifying session at Silverstone since being called up to fill in for Sergio Perez, who has contracted coronavirus, Hulkenberg outqualifed Red Bull’s Max Verstappen to head up the second row behind the dominant Mercedes cars.

Hulkenberg, who only formally received confirmation on Friday morning that he would be racing again this weekend, also outqualifed Racing Point regular Lance Stroll by four tenths of a second.

And Sky F1’s Jenson Button said: “He didn’t do any preparation for this season in terms for working with the team, also on his fitness, so to come here on his second weekend with the team and put it P3, that is an extraordinary lap.

“And up against some true greats.

“He was up against Max Verstappen for that P3, he was up against Daniel Ricciardo. They are both at the top of their game and he put one-and-a-half to two tenths in them.”

Hulkenberg last qualified inside the front two rows at the 2016 Austrian GP, when he last drove full-time for the Silverstone-based team (then known as Force India).

The 32-year-old was all the more pleased given he had feared he had damaged his RP20 car over the kerbs at Becketts during Q2.

“A crazy seven or eight days!” said Hulkenberg. “Obviously last week, with the big high to come back and the low on Sunday [not starting the race], it was very extreme. This weekend I felt much better in the car, much more prepared. Qualy was still tricky and in Q2 I made life hard for myself a bit and I was scared I’d damaged the car.

“Q3 was just head down, full beans, whatever I had – and a bit surprised to stand here. But obviously a big smile on my face and a lot of respect for the race tomorrow.”

After acquitting himself well on his first outing in the RP20 at last week’s British GP, Hulkenberg was unable to take the start when his car would not fire up.

Famously, he has never finished on the F1 podium in a record 177 attempts but the pace of the Racing Point – the centre of the weekend’s big off-track controversy – means he might not have a better chance than Sunday.

“It’s definitely going to hurt tomorrow not having last week’s experience and not having gone through the motions there with the start and everything,” said the German. “But we’ll do what we can, I’ll try to learn fast, and keep the car where it deserves to be.”

Daniel Ricciardo: “The Hulk’s come in – I think he’s adjusted his neck this week! – and he’s free and ready to go! Honestly, hats off to him. We all know that car’s working, but I don’t just want to say it’s the car.

Lewis Hamilton: “He did a great job today and I hope he does a good job tomorrow. It’s good to see him back.”

Max Verstappen: “I’m very happy for Nico. He should have been already on the grid normally and I hope that this will give him a seat for next year.”

See also  Checking In On The NFL Power Rankings