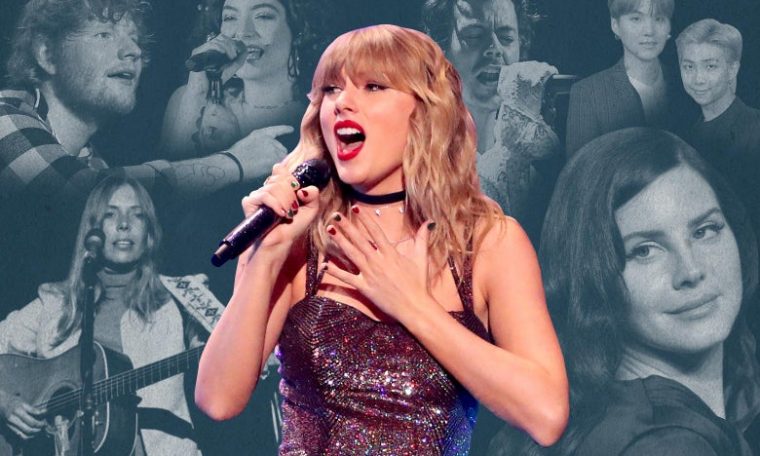 For Taylor Swift, an album release marks the culmination of months, if not years, of labor. But her finish line is only the starting point for fans: New Taylor music is a signal to put on their detective hats and get to scouring every lyric for clues and references Swift has embedded throughout the songs. Folklore’s release last week was no different from any of Swift’s previous outings in this respect, as online platforms quickly exploded with fan speculation about what it all means. Many of these discussions focus on the text of the music itself—the Betty, James, and Inez of it all—but the most intriguing conversation this time around has to do with authorship rather than lyrics: Who is William Bowery?

Someone named William Bowery is credited with co-writing two songs on Folklore, “Betty” and “Exile.” But no one has ever heard of Bowery, and no one with that name has any previous songwriting credits to speak of, according to fans who have combed through all readily available reference material. Assuming he exists at all, we only know a few things about this Bowery for sure. One of them is that Swift admires his musical abilities quite a bit: When she announced the album on social media, she wrote that it gave her the chance to collaborate with “some musical heroes of mine,” before naming the National’s Aaron Dessner, Bon Iver, Jack Antonoff, and—sticking out among such distinguished company—Bowery.

The best of movies, TV, books, music, and more, delivered to your inbox three times a week.

Also lending credence to the idea that Bowery is a nom de plume is Swift’s dalliance with pseudonyms in the past. In 2016, she revealed that, while she was dating DJ Calvin Harris, she secretly co-wrote one of his biggest hits under the name Nils Sjöberg. All signs point to William Bowery being another classic Swiftian mystery. The theories about his identity are numerous, so let’s go through them one at a time, from least to most believable.

If there were a William Bowery gifted enough to be one of Swift’s musical heroes, wouldn’t he be, if not world-famous, someone whose existence could at least be corroborated by even one other person? The complete lack of an internet trail is suspicious. Plus, the name itself smacks of fiction. “Bowery” is not a particularly common surname, but it is the name of a street in downtown New York City—a place where Taylor Swift used to live and has sung about before. All of this adds up to the obvious: There simply is no William Bowery. I’m reasonably sure that if a songwriter with that name really existed, he would be tied to a chair being interrogated by a gang of militant Swifties right now.

9. One or More Members of BTS

Refinery29 listed RM, a member of the South Korean boy band BTS, as a possible Bowery, and a few Twitter users have espoused this view as well. Meanwhile, some other Twitter users have posited that Bowery is a different BTS member, Suga. I think at least some of these fans are making a metajoke about the complete lack of evidence all the other theories about Bowery’s identity are relying on. But some of them are probably just stans who want to believe.

Because why not! Even the people suggesting this one admit it’s in “total crackpot” territory.

Mitchell is definitely a musical hero to Swift, who has frequently cited the grande dame of folk music as one of her favorite artists. A song off Swift’s previous album, “The Lucky One,” was even said to be about her. The less convincing pillars of this theory are that Mitchell, also a painter, has a painting called Bowery Bum and that her father went by the name Bill, a nickname for William. Then there’s the question of passing a woman off as a man, which would seem to go against Swift’s belief in feminism. (Then again, when Swift herself used a pen name, she chose a man’s name.) But the biggest strike against this theory might be that if Swift wrote a song with Mitchell, she’d probably want to shout it from the rooftops rather than hide it.

This one is about as thin as the BTS and LDR theories: Fans have guessed that William Bowery could be a pseudonym for Lorde because Lorde and Swift are friends and that would be cool. To be fair, there is documented evidence that the two are actual friends, which is more than can be said for Nos. 7–9 on this list.

The Sheeran truthers, like many of the factions here, don’t have much to go on. They point out that Sheeran and Swift are friends and he is also a musician, one with roots in folk. It’s true that the two have collaborated before. It’s also true that Sheeran has performed at Bowery Ballroom, and his shows sometimes incorporate the harmonica, an instrument that can be heard on “Betty.” The guitar in that song also gives it a Sheeranish sound, some have posited. Lastly, Sheeran has a grandfather named William, one who’s appeared in his own lyrics. Needless to say, all of this seems highly circumstantial. Don’t a lot of people have grandfathers named William? Why would Swift and Sheeran have to hide their collaboration when it’s common knowledge that they’re pals who’ve recorded songs together before? Sheeran as Bowery is really only plausible if you also buy into the conspiracy theory that he and Swift have dated in the past or are dating now and need to cover it up.

Swift’s brother, Austin, who is also a musician, played a key role in another mystery connected to his sister earlier this year. In May, a cover of Swift’s song “Look What You Made Me Do” appeared in the TV show Killing Eve. The cover was credited to Jack Leopards & the Dolphin Club, a group that, just like William Bowery, has no presence online and no one had ever heard of. Nils Sjöberg, a previous Swift alias, was listed as a producer on the song. As for Austin’s involvement, Swift had reportedly previously asked Killing Eve creator Phoebe Waller-Bridge about featuring her brother’s music. Separately, fans noticed that the art that went along with the song resembled a childhood photo of Austin, who had also referenced “the Dolphin Club” in his display name on Twitter at some point. This whole scheme may have been a way to stick it to Scooter Braun, with whom Swift is engaged in a very public feud with over ownership of her back catalog. Apparently, a TV show using a cover of one of her songs rather than the original would deprive Braun of royalties. But the Braun–Swift feud only concerns her earlier albums; she owns the masters on Lover and Folklore. Where Swift had a reason for obscuring her brother’s alleged involvement a few months ago, none of this points to why she would give her brother a pseudonym this time. That doesn’t mean it’s impossible that Austin could be Bowery, just that he’s no more likely to be Bowery than anyone else in Swift’s inner circle.

Some fans noted that Swift’s last confirmed use of a pen name was during the Nils Sjöberg affair, and the person’s identity she was covering up then was her own. Assuming a man’s name in a male-dominated field like the music industry was both a way to feel less conspicuous and a bit of insurance against those who would underestimate her. I wouldn’t put it past her to do it again. Boys have come and gone over the years, but Swift’s commitment to upholding her reputation has been a constant. Now, why she would need to use a pseudonym to take credit for a song that she was already credited with writing is a different question.

Refinery 29 has pointed out that Dessner—who claims not to know Bowery’s true identity despite also collaborating on Folklore—thinks the real Bowery is an experienced songwriter. Swift’s ex Styles has moonlighted with songwriting under a pseudonym before, and when he did, some thought the resulting songs were about Swift. How does this connect to “Bowery”? Apparently in 2012, when Styles and Swift were a couple, they stayed at the Bowery Hotel. The Bowery Ballroom is also one of the last places Styles performed before the coronavirus lockdown began. Looking to the lyrics themselves, there’s a line in “Exile”—“We always walked a very thin line”—that fans have said evokes Fine Line, the name of Styles’ most recent album. (This theory doesn’t seem to account for “William” at all.) The strongest evidence for the Styles-as-Bowery case might be that it would indeed cause a frenzy if the media found out that Styles and Swift collaborated, which seems like a plausible motivation for pseudonym-ing up.

Dessner said Alwyn’s not Bowery. But Dessner has also said he doesn’t know who Bowery is. And sometimes the simplest explanation is the right one. Alwyn is the guy Swift is dating right now, so if there are secret shoutouts on her album, shouldn’t they be to him? In fact, if Alwyn isn’t Bowery, he should be having an awkward conversation with Swift right about now. A pen name would also fit with the narrative of Alwyn wanting to keep their relationship very private. All that said, some of the “evidence” for Alwyn as Bowery is pretty weak-sauce: Alwyn’s great-grandfather was a composer and was named William. (Once again: Many people have or had old relatives named William!) Slightly more convincing is that Swift and Alwyn were spotted at the Bowery Hotel in New York early on in their relationship, after they’d attended a private Kings of Leon concert—it’s not a huge leap to guess that this date might have a special significance to them. (Possibly also notable detail: Lorde was there too.)

As for whether Alwyn has enough musical talent to co-write a song with one of the music industry’s top artists, I was intrigued by one Reddit fan’s point that at least once before, in the song “Ronan,” Swift gave a songwriting credit to someone who didn’t directly contribute to writing that song but whose words she quoted on it. Perhaps Alwyn didn’t exactly help write “Exile” or “Betty,” but Swift quoted his notes or texts to her in it. Of course, the same could just as easily be true of someone else. And it still leaves us with no explanation for the “musical hero” aspect of the puzzle. Whatever the case, the identity of a writer named William has not been this hotly contested since the Bard.