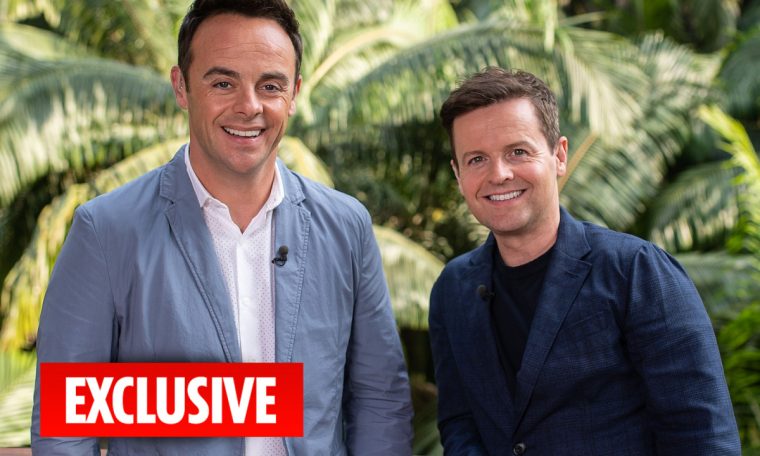 I’M A Celebrity WILL return this winter — and ITV have set aside £15million to make sure.

Top channel boss Kevin Lygo today vowed to “move heaven and earth” to ensure hosts Ant and Dec are back in Australia in November.

A show source said: “Bosses are sparing no expense to get the jungle on air.”

ITV chiefs have set aside up to £15million so the UK’s most popular entertainment show goes on.

Kevin Lygo said: “Of course it wouldn’t be autumn on ITV without I’m A Celebrity . . . Get Me Out Of Here!

“As you can imagine we are moving heaven and Earth to try to film the next series in November. There should also be a spin-off show.”

I’m a Celeb is worth millions in ad revenue.

A show source said: “Bosses are sparing no expense to get the jungle on air.

“It’s their biggest and most lucrative show and despite a challenging financial situation they have set aside a big pile of dosh to make it happen — not only on talent but to cover the cost of crew, production and all of the costs that come with it.

“There’s been a lot of discussion about whether or not they could feasibly get it on air, but as Kevin says they’re doing their utmost to make sure it will happen. They can’t afford for it not to.”

The news that the jungle show will go ahead heralded ITV’s big bounce back from chaos caused by Covid-19.

Mr Lygo, the channel’s director of television, also announced the full-time return of soaps Emmerdale and Coronation Street — with six episodes a week of each from mid-September.

And he confirmed that the interrupted series of Britain’s Got Talent would air early the same month.

Mr Lygo said of the show, featuring Alesha Dixon as a judge: “Viewers will have to wait no longer as we complete the Britain’s Got Talent series with six final shows without an audience this time but no less thrilling.”

He added: “We’re in a better place than I thought we would be. With a dozen or so dramas we won’t be watching repeats of Midsomer Murders in January after all.”

He also unveiled a new film fronted by actress Sheridan Smith. She reveals her mental health struggles and fears before and after pregnancy in Sheridan Smith: Becoming Mum.

Other highlights include two-part drama Honour, starring Keeley Hawes, Prince William fronting a documentary on climate change and a show in which celebs row a boat from Land’s End to John O’Groats.

ITV has given us the best news in months.

Corrie and Emmerdale back full-time.

The BGT series will get finished.

And Britain’s biggest show I’m A Celeb will be back on, from Down Under.

We can forget about an invisible bug. And wince over revolting Aussie ones instead.