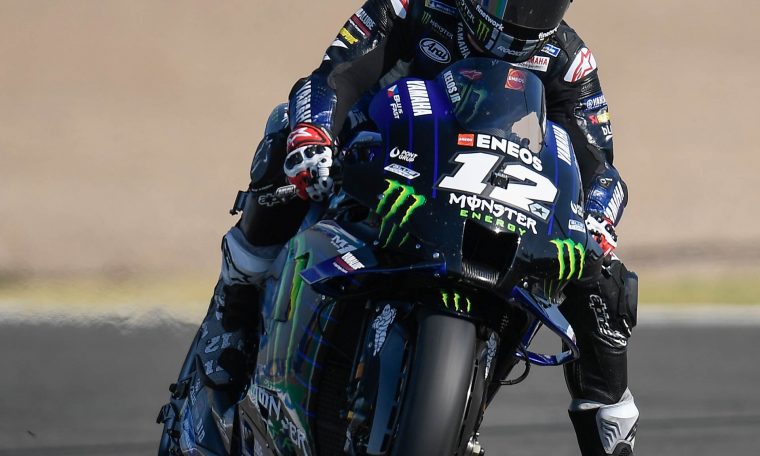 Marc Marquez sat out Friday’s proceedings at Jerez after that sickening crash during the race last Sunday that led to him having surgery to plate his broken right humerus in Madrid on Tuesday. Early indications were that the defending World Champion would not be back for a few weeks but the 27-year-old Spaniard insisted that he wanted to try and ride this weekend and subsequently passed a fitness test on Thursday when he returned to Jerez. All cameras were on the Repsol Honda garage as Marc prepared to take to the circuit in Saturday morning’s 45-minute FP3 session.

Maverick Vinales had topped the charts on Friday while Valentino Rossi made it a Monster Energy Yamaha 1-2 ahead of KTM’s Brad Binder. The South African rookie very impressive in both sessions on Friday as was fourth place Franco Morbidelli.  Jack Miller was the quickest Ducati on Friday in P7, only half-a-second behind Vinales’ benchmark while the top 16 were covered by less than a second.

Marquez was not the only rider returning to action as Cal Crutchlow had also gone under the knife on Tuesday to have a screw inserted into his broken left scaphoid. Alex Rins had sat out the race last weekend after breaking his collarbone but returned to action on Friday through some obvious discomfort, that pair had brought up the rear of the field on Friday.

In FP3 on Saturday riders did not hang about right from the off with Takaaki Nakagami, Pol Espargaro and Fabio Quartararo all immediately into the 1m37.2s, quicker than the best times they had set on Friday.

Marc Marquez went out and completed five laps before returning to the pits after setting a best of 1m38.246 to be 18th on combined times. He certainly didn’t look as animated and aggressive on the motorcycle as he generally does but he was elbow-down from lap two. After talks with his team and a few minutes rest Marquez rejoined the circuit.

Pecco Bagnaia then dropped in the first 1m36s lap of the weekend, a 1m36.847 by the Pramac Ducati man to go top on the combined time-sheets with less than 20-minutes remaining in this FP3 session.

With 20-minutes remaining Marquez picked up his pace, a 1m37.882 for 11th in the session thus far and P16 on combined times, quicker than his team-mate and younger brother Alex.

Vinales had been putting in plenty of laps but it was not until there was only 13-minutes left in the session that Maverick improved his benchmark time from Friday, a 1m36.763 to go P2. Quartararo then dropped in a 1m36.655, after being quicker than his previous fastest lap through the first three splits he lost a little in the final sector and failed to improve.

Jack Miller pushed his way up to P5 on combined times with a 1m37.136 but Pol Espargaro then dropped in a 1m36.955 to relegate Miller to P6 with ten-minutes remaining in the session. At this T-minus-10 juncture Rossi was P7 courtesy of his Friday time, Binder P8, Morbidelli P9 and Joan Mir rounded out the top ten ahead of Johann Zarco. Marc Marquez was P18 after putting in 15 laps.

With two-minutes remaining Maverick Vinales went P1 with a 1m36.584 to lower the outright lap record and push Quartararo back to P2.

Jack Miller then put in his time attack and set his fastest ever lap of Jerez with a 1m36.710 to go P3 and top Ducati.

When the clocks stopped less than half-a-second covered the entire top ten.  Of course it is that top ten that earn automatic qualification straight through to Q2. Andrea Dovizioso only P14 thus will have to contest Q1.

Alex Rins sat out FP3 but Crutchlow was circulating on the LCR Honda and finished P17 on combined times, two-tenths quicker than Marc Marquez who finished up in P20.

MotoGP riders will be back on track tonight at 2130 for FP4 ahead of the two qualifying sessions, the first of which gets underway at 2210 followed by Q2 at 2235.