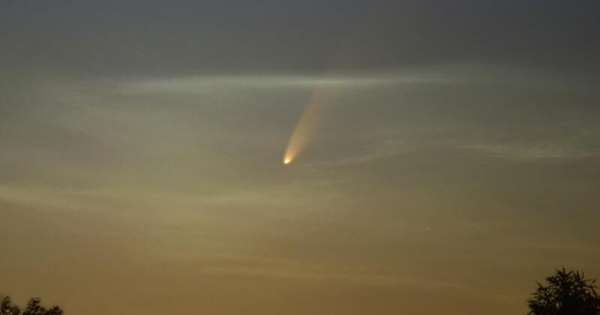 Comet Neowise, the most impressive comet in nearly 25 years, is making its closest pass by Earth right now, offering sky watchers a last chance to catch it.

© Provided by CNET
Comet Neowise as seen from the Czech Republic on the morning of July 6. Jan Tláskal/Spaceweather.com


Emily Kramer, co-investigator on the science team for the NASA Neowise spacecraft that discovered the comet, noted that it’s rare for a comet to be bright enough to see with the naked eye.

Neowise survived its closest brush with the sun on July 3 and has been heading in our direction ever since.

Over the past couple of weeks, a number of amateur astrophotographers have shared stunning images of the comet captured as it appeared just above the horizon in predawn skies.

Astronauts on the International Space Station have also spotted the comet, aided by their premium vantage point, and NASA’s Parker Solar Probe captured the profile of Neowise, showing it has multiple tails.

Comet Neowise as seen from the Czech Republic on the morning of July 6.

According to NASA solar system ambassador Eddie Irizarry, the comet should be easier to see this week as it climbs a little higher in the sky. There are beginning to be a few reports, however, of Neowise growing more faint, so don’t delay.

Right now, the advice being shared by many of those who have successfully spotted the comet is to first locate it in the sky using binoculars or a telescope. Once you’ve found it and its trademark split tail, you should be able to then track it with the naked eye.

After the comet’s closest pass by Earth on Thursday it will rise a little higher in the sky on July 24 and 25, in case you miss the actual flyby date. From that point it’s likely to get dimmer as it returns to deep space.

There’s still a slim possibility, for the most optimistic of us, that Neowise might brighten dramatically to become a so-called “great comet” that’s easily visible and spectacular to see with the naked eye. While there’s no strict definition of what a great comet is, it’s generally agreed that we haven’t seen one since Hale-Bopp.

The comet will be visible toward the northwest and western edges of the sky. A good rule of thumb is to find the big dipper and start looking below it.

Here’s where you can spot the comet over the next couple of weeks. Online resources like TheSkyLive also offer similar night sky maps to aid your comet quest.


If you don’t catch the comet before it inevitably fades away in August or sooner, you’ll have to wait awhile for its next trip through the inner solar system, currently estimated to happen in the year 8786.