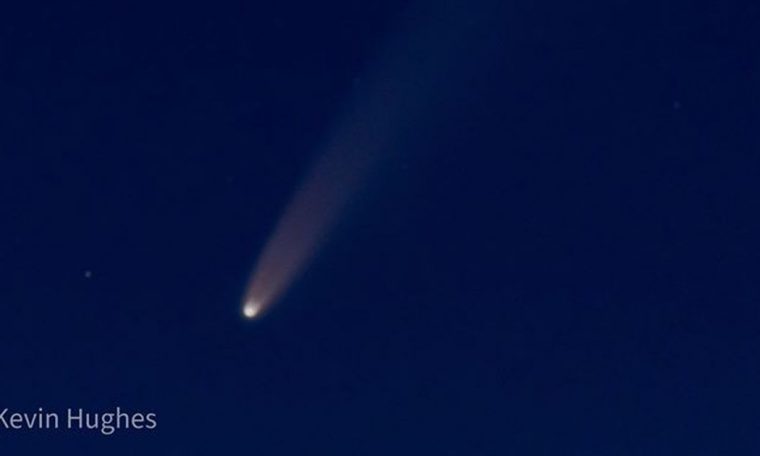 It could be your last chance to spot Comet Neowise this week for more than 6,000 years.

The comet passes closest to Earth on July 23, when it will be below and just to the right of the most famous constellation in the Northern Hemisphere’s sky, the Big Dipper.

On July 25, it will be directly under it – before continuing to move west and slightly upwards.

The comet won’t return to our skies for another 6,800 years so it’s a sight well worth seeing.

The comet is the brightest seen in the Northern Hemisphere in 25 years and was discovered by Nasas Near-Earth Object Wide-field Infrared Survey Explorer (NEOWISE) mission on March 27.

The comet is currently visible after sunset and will have its closest encounter with Earth on July 23 when it will be around 64 million miles away.

When to spot comet neowise

So if you want the best chance of spotting it, you will need to get up really early or stay up very late.

In mid-July, the comet is most visible around 80 minutes before the sun rises, so your best chance at spotting it is shortly after 3.30am.

But people have reported seeing the comet any time after 10pm in dark areas with a clear horizon.

The comet was discovered in late March by a space telescope and will be visible over the UK throughout July.

The comet is rare because it survived a close encounter with the sun, passing it at around the same distance as Mercury, the planet closest to the sun in our solar system.

Mercury travels around the sun in only 88 days and is the smallest planet, only a little larger than the moon.

How to see it

The comet is incredibly bright so it’s visible to the naked eye without a telescope.

Binoculars aren’t necessary to spot the comet though if you have a pair, they will intensify the view.

If you’re not sure what to expect, the comet will look like a blurry star with a bit of a tail.

The best way to catch a glimpse is to look out for the Big Dipper, also known as the Plough.

Keep up to date with local news in your area by adding your postcode below:

If you look eastwards on a clear night in an area with low light pollution, you should be able to spot it.

Neowise will be below the Big Dipper and around 10 degrees above the horizon.

“So, on these mornings, the head of Comet Neowise will appear about ‘one fist’ up from the north-east horizon.”

The comet passes closest to Earth on July 23, when it will be below and just to the right of the Big Dipper.