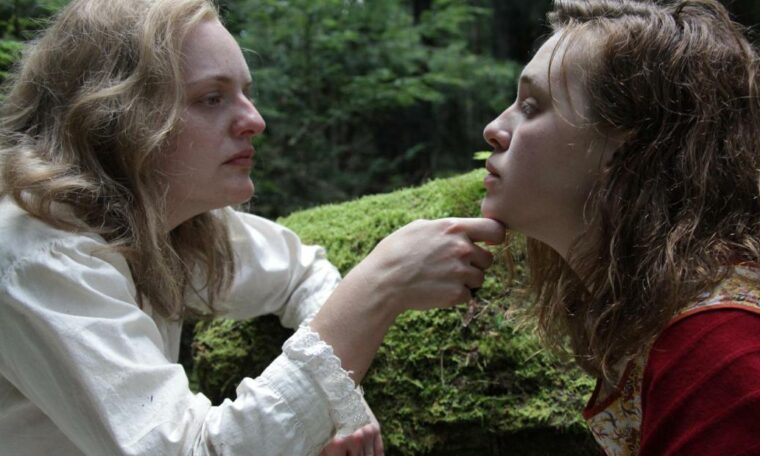 Adapted from Susan Scarf Merrell’s book, the movie introduces Jackson (Moss) as a near-bedridden wreck, living in Vermont with her English professor husband Stanley Hyman (Michael Stuhlbarg) when the aforementioned fictional couple lands at their doorstep.

Fred Nemser (Logan Lerman) has arrived for a teaching gig along with his new bride Rose (Odessa Young), who is enlisted to perform work around the house. Rose’s main job, however, turns out to be serving as a companion to Shirley, who — coming off her success with short stories — is embarking upon a novel, despite Stanley’s concerns that in her fragile condition she’s “just not up to it.”

The book would turn out to be “Hangsaman,” considered one of Jackson’s best. Yet there’s a lot more going on than that, especially for poor Rose. Shirley is blunt and abusive, while Stanley is creepily lecherous, pawing her at every opportunity. It’s a wonder, frankly, that the newlyweds don’t run fleeing from the house right away, although Fred’s ambitions are used to explain their pliancy.

Directed by Josephine Decker (“Madeline’s Madeline”) from Sarah Gubbins’ script, “Shirley” wrestles with the age-old problem of how to translate an author’s creative process — all that ideating inside her head — to the screen, with fitful success that includes, unfortunately, weird trances.

Structurally, the project has the feel of a stage play, operating mostly within a confined space, underscoring the narrow parameters of Jackson’s actual world versus her intricately imagined one.

The narrative thrust thus becomes Rose’s awakening and the evolving dynamic between the women, though Stuhlbarg is quite good, despite the stilted and unappealing nature of his character.

With her TV pedigree from “Mad Men” and “The Handmaid’s Tale,” Moss has gravitated toward a variety of challenging movie roles, from “Her Smell” to this year’s “The Invisible Man,” with mixed results. Frequently, she’s outshines the material, which again feels like the case here.

“Shirley” was clearly intended for the film-festival circuit, offering a narrowly pitched story where it’s easy to admire the performances without feeling like the journey adds up to much. While Moss captures the complexity of Shirley’s personality, the movie sheds scant light on the underlying why of it all.

At its best, “Shirley” serves as a snapshot of its time, and how the struggles of a tortured artist were exacerbated by being a woman in the 1950s and early ’60s.

Yet in the same way that “Shirley” labors, with Rose’s help, to find the core of her book, “Shirley” faces a similar test, and cinematically speaking, comes up a few chapters short.

“Shirley” premieres on Hulu, on demand and in drive-in theaters on June 5.