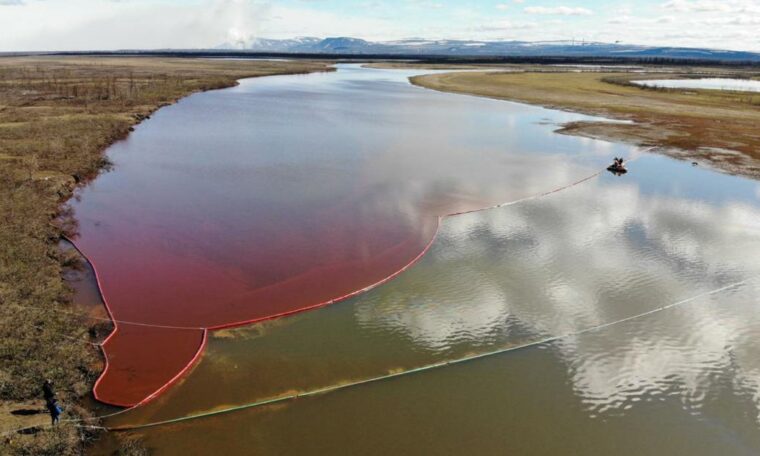 An environmental group described the damage as “catastrophic,” and the concentration of pollutants in nearby waters has already exceeded allowable levels tens of thousands of times, according to Russia’s Rosprirodnadzor environmental agency.

Originally, the plant’s employees tried to contain the spill on their own and did not report the incident to the emergency services for two days, the head of the Ministry of Emergency Situations, Evgeny Zinichev, said during a Wednesday meeting chaired by Putin. and shown on national television.

“So what, are we going to learn about social media emergencies now? Are you okay there?” Putin said, chiding Krasnoyarsk governor Alexander Uss and managers of the Norilsk-Taimyr Energy Company, which operates the station, for a belated response after local authorities learned of the spill on social media.

The Investigative Committee, Russia’s main law enforcement body, said Tuesday that a criminal investigation was launched into 20,000 tons of diesel fuel that spilled into a Norilsk river after the “unexplained decompression” of a storage tank. .

Nornickel, the parent company of the power company, said the base of the storage tank possibly sank due to the thawing of permafrost, highlighting the dangers that increasingly warmer temperatures pose to Arctic infrastructure and ecosystems, according to the Russian state news agency TASS.

“At this point we can assume … that due to the abnormally mild summer temperatures recorded in recent years, the permafrost may have melted and the pillars below the platform may have sunk,” said Sergey Dyachenko, chief operations officer at Nornickel. , according to the TASS. news agency.

North Asia, especially above the Arctic Circle in Siberia, has seen the highest-than-normal temperatures on the planet so far in 2020. During the first four months of the year, the region has seen temperatures of more than 4 degrees Celsius above normal on average.

Scientists say the Arctic region is warming, on average, twice as fast as the rest of the planet, as a result of global warming.

Local authorities said the spill could take weeks to begin cleanup, as the region lacks experience using such amounts of fuel, the river is not navigable, and there are no roads around it. Additional groups of experts from other regions are being deployed after the state of emergency.

“The incident had catastrophic consequences and we will see the repercussions for years to come,” Sergey Verkhovets, arctic project coordinator for the Russian branch of WWF, said in a statement. “We are talking about dead fish, contaminated plumage of birds and poisoned animals.”

Norilsk has historically been one of the most polluted cities in the world. According to a 2018 NASA study According to satellite data, Norilsk tops the list of worst sulfur dioxide pollution, spewing 1.9 million tons of gas on the Arctic tundra.