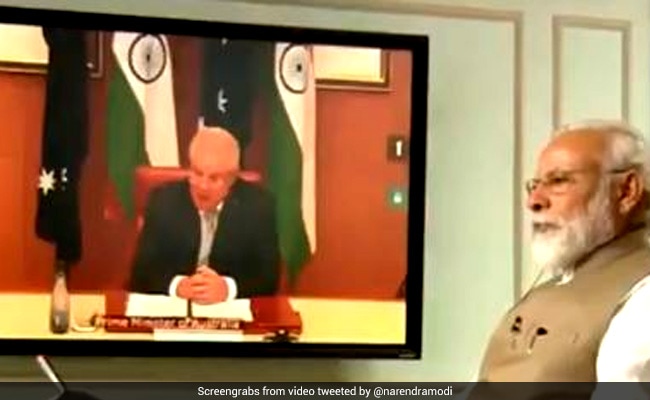 The Australian Prime Minister had tried last week to make an Asian snack, Samosa, at his home and shared his photos on his official Twitter handle, calling them “ScoMosas”. This morning, he told Prime Minister Modi: “I am looking forward to the first India-Australia virtual summit and the Modi hug. I appreciate the ScoMosas … we had a lot of fun this weekend. Next time, it has to be Gujarat Khichdi. I’ll try it in the kitchen before I do it in person. “

In response to Mr. Morrison, Prime Minister Modi, who has often been photographed hugging world leaders, said: “Gujratis will be very happy to hear that. Khichdi is eaten across the country, people can give different foods different names in different parts. “

The tweet published by Scott Morrison on Sunday said: “Sunday ScoMosas with mango chutney, everything made from scratch, including the chutney! Too bad my meeting with @narendramodi this week is by video link. They are vegetarians, I would have liked to share them with the “.

Sunday ScoMosa with mango chutney, all made from scratch, including the chutney! Too bad my meeting with @Narendra Modi This week is by videolink. They are vegetarians, I would have liked to share them with him. pic.twitter.com/Sj7y4Migu9

Today’s two world leaders “had an outstanding discussion, covering the full extent of our relationship,” Prime Minister Modi said this afternoon. “The ties between India and Australia have always been close. As vibrant democracies, from the Commonwealth to Cricket and even Cuisine, our person-to-person relationships are strong and the future is bright,” he tweeted.

The two prime ministers have already met four times in the past 1.5 years.