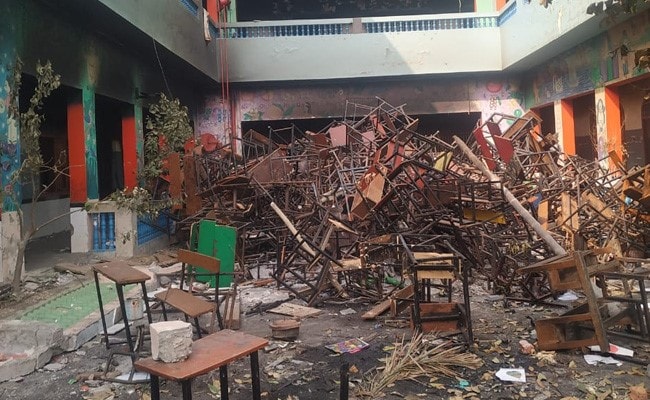 The Rajdhani school and the DRP Convent school, which was attacked, were adjacent to each other.

A charge sheet was filed in connection with the Delhi riots in February this year, in which a school and adjacent candy store burned down and a man trapped inside the store died. Police had named 18 people, claiming that Faisal Farooque, the owner of a nearby school, was the key conspirator in the case.

The police also claimed that Faisal Farooque had ties to prominent members of the Islamist group Popular Front of India, the “Pinjra Tod” women’s collective that works for the rights of university students, the Jamia Coordination Committee of the prestigious Jamia Millia Islamia. , the headquarters of Tablighi Jamaat and some Muslim clerics.

The Anil candy store, located across the road, was also burned down and one of its employees, Dilbar Negi, who was trapped inside, died.

The charge sheet said Faisal Farooque had “hatched a conspiracy to precipitate and exacerbate riots, in and around the Rajdhani school.”

“Following instructions from Farooque, the adjacent and rival DRP Convent School, 2 parking lots managed by the other party and the Anil Sweets building were systematically destroyed by the mob,” police said in their charge sheet.

Protesters, according to police, camped inside and shot bullets from the terrace of the Rajdhani school.

See also  L'Amrique Latin, the latest novelty for the first Convert to China?

“They also dropped gasoline, acid, brick, stone and other missile bombs using a large makeshift iron catapult, specially installed for that purpose, from the terrace of the Rajdhani school,” the charge sheet read.