Home Top News The former church minister used for the Trump photo shoot: “It was sacrilege for all people of all religions” 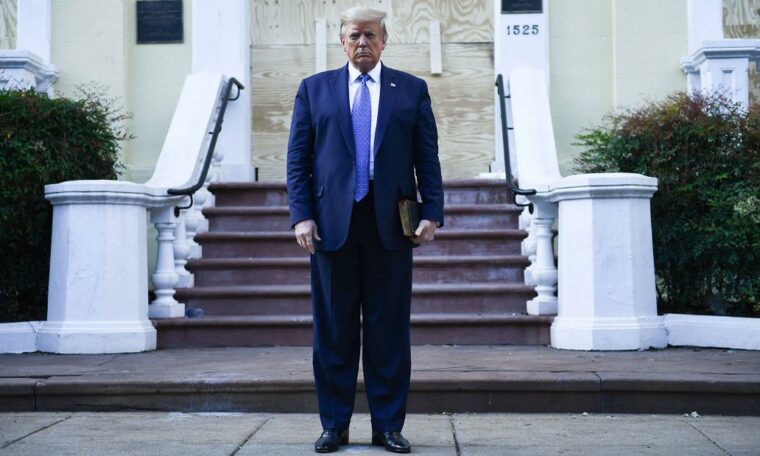 After a speech from the Rose Garden of the White House, the President walked to the Episcopal Church of San Juan, a house of worship used by American presidents for more than a century. Peaceful protesters outside the White House gates were dispersed with tear gas, grenades, and rubber bullets. Apparently, it was all so that Trump could visit the church.

“I couldn’t believe it,” the reverend Gini Gerbasi, who was among the authorized people at St. John’s Church, told CNN’s Jake Tapper on “The Lead” on Tuesday.

“When I realized that people had been hurt and terrified by a political trick, it offended me, it just started to describe how I feel. I feel it was sacrilege for all people of all religions, religions founded on peace and love , compassion, reconciliation, integrity, healing, forgiveness, peace, love, compassion. “

The move, he continued, “was sacrilege. Absolute sacrilege.”

The photo shoot followed almost a week of protests across the country that have sometimes turned violent the death of George Floyd, a 46-year-old black man who was killed by a police officer in Minneapolis.
Trump had been angered by the news coverage that represented him hidden in an underground bunker amid protests in Washington. He told attendees Monday that he wanted them to see him outside the doors of the White House, according to a person familiar with the matter, which is part of what led to the decision to organize the photo shoot at the Church of San Juan. .

In recounting how the authorities began secretly accusing the crowd, Gerbasi said he was “helping to wipe the tears from people’s eyes and trying to attend to them and help them on the ground and suddenly the police were pushing us.”

“And people fell to the ground, scared. And they were: when they heard those flashes, they thought they were being shot, and people were running towards us. And literally at some point, when I looked up and the police were so close that I had than grab some things and run. “

Bishop Mariann Edgar Budde of the Episcopal Diocese of Washington said Monday she was “outraged” by the move and called the president’s message “antithetical to the teachings of Jesus.”

“The President did not pray when he came to St. John’s, nor, as you have just expressed, recognized the agony of our country at this time.” Budde told CNN’s Anderson Cooper about “AC360”.
And while the photo shoot also fueled a gut reaction among Democrats, top Republican senators: for the most part – He aligned himself directly with the President, saying that he had the right to take that measure.

But Gerbasi stressed on Tuesday that the cleanup of peaceful protesters should not be seen through a political lens.

“That man taking that witness of presence and peace and shooting tear gas or pepper spray or whatever those canisters were, and those little explosive things and rubber bullets and the show of force, was not the kind of faith I have.”