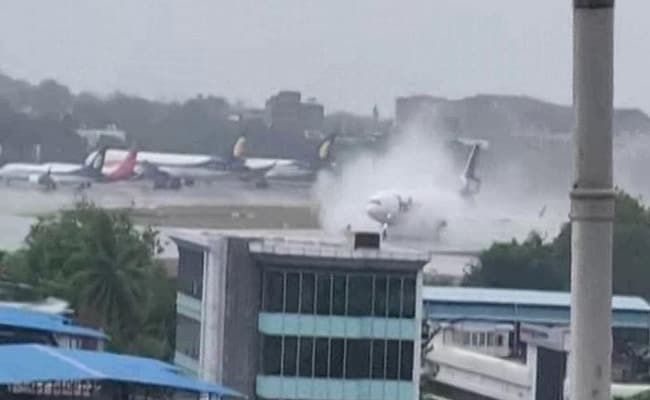 A cargo plane left the runway after landing in heavy rain at Mumbai airport when severe cyclonic storm Nisarga touched down on the coast of Maharashtra today. In pictures, the plane is seen to stop on a wet runway and in heavy rain as its huge landing gear displaces the water with a strong force, creating jets of water that rise several meters above the ground.

The plane has been towed away from the runway and the incident did not interrupt flights. After arguing with the India Airports Authority, the Mumbai airport decided not to operate flights until 6pm today.

“Chhatrapati Shivaji Maharaj International Airport witnessed an excursion to the runway today with FedEx Flight 5033 arriving from Bangalore. The incident occurred when the MD11 aircraft landed on runway 14/32. The aircraft was towed off the runway and There has been no disruption to flight operations, “Mumbai airport said in a statement.

“The airport will operate a total of 19 flights including 11 departures and 8 arrivals on June 3. The flights will be operated by 5 airlines: Air Asia India, Air India, IndiGo, GoAir and SpiceJet. There may be schedule changes and Passengers should check the schedule with their airlines before leaving for the airport, “said GVK, which manages the Mumbai airport, in a statement.

Crosswinds and heavy rains as a result of the strong cyclonic storm could make it difficult for landing and takeoff for pilots, who need to align their large passenger aircraft with the runway properly.

The storm is expected to weaken in a cyclone in a few hours. With the slowdown in wind speed, Mumbai, affected by the coronavirus, may have escaped the worst of the tropical storm. No damage has been reported from the financial capital where the movement of people is restricted in public places such as beaches, parks and walks along the coast until tomorrow afternoon.

The MD-11 has been a long-body, long-range aircraft in service since 1990. It was manufactured by McDonnell Douglas before the company merged with Boeing. The latest MD-11 was delivered by Boeing in 2001, according to the aviation industry tracking website Skybrary.