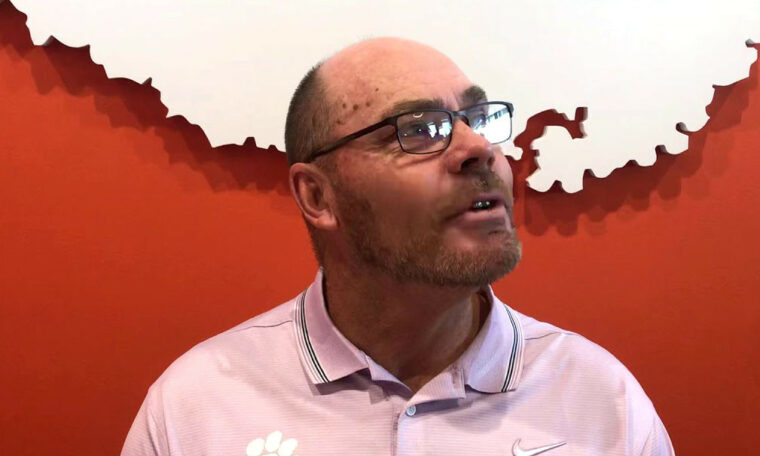 CLEMSON, S.C. – Clemson’s assistant coach Danny Pearman said he made a “serious mistake” when he repeated a racial slur at the tight end of former Tigers D.J. Greenlee in practice three years ago.

The incident came to light on Tuesday when former player Kanyon Tuttle posted it on social media. Tuttle was responding to the school’s posting of comments from Clemson’s head coach Dabo Swinney about the death of George Floyd in Minneapolis last week.

Floyd, a black man, died after a white Minneapolis police officer pressed his knee to Floyd’s neck for several minutes, even after Floyd stopped moving and begging for air.

Tuttle’s post read: “You allowed a coach to call a player the N-word during practice without repercussions. Not even a team apology.

Pearman is white and Greenlee is black.

Pearman said that while he did not direct the insult at Greenlee, “I know there is no excuse for him to use the language under any circumstances. I should never have repeated the phrase. It was wrong when I said it, and it’s wrong today. ”

Greenlee told the State of Columbia, South Carolina that he and a teammate were arguing and that the tight end used the insult during the exchange. Pearman listened to Greenlee and used him again. I was trying to “correct myself by saying the insult,” Greenlee said.

Pearman said Greenlee “appropriately” brought the matter up to Swinney. Swinney and Pearman had a meeting, and the head coach told the assistant that their language was “unacceptable”.

Pearman said he apologized to Greenlee after practice and to his position groups the next day.

Pearman said he would never do anything “to intentionally hurt” Clemson’s players.

“I sincerely apologize to D.J., his family, our team, and our staff,” Pearman concluded.