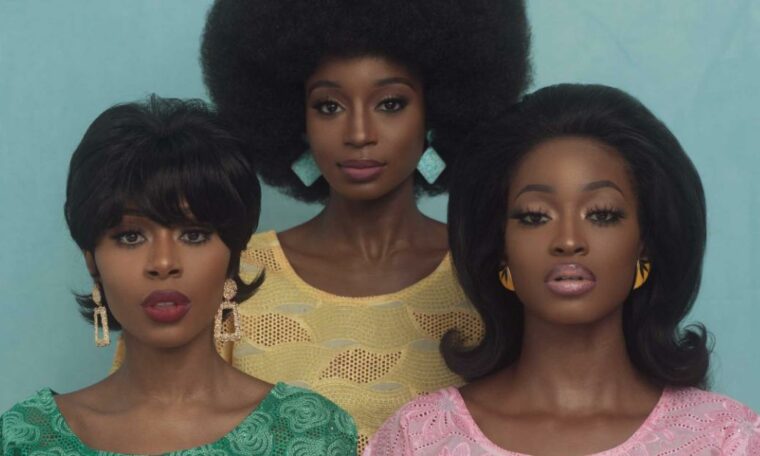 For his latest project, Nigerian photographer Oye Diran drew inspiration from his old family photos. She was especially drawn to the stylish clothes her parents used to wear, including her mother in classic Irish and Nigerian buba style (a wrapped skirt and tailored top), often paired with a gele (headwrap).

“I was amazed at how attractive and rich these outfits looked and remembered how well my parents and their friends dressed when I was young,” Diran wrote via email from where he now lives in New York. “The relevance of iro and buba does not dissipate over time, so I came up with this story to shed light on the beauty of my heritage in the world.”

Diran continued researching more images of Nigeria in the 1960s and 1980s, before recreating the same vintage sentiment of “To You From” (“We’ve Arrived”), with portraits of three women dancing, posing and having a good time. “The Yoruba are known to find some reason to dress and celebrate,” he said, referring to Nigeria’s second-largest ethnic group. “Traditional weddings, for example, are an opportunity to wear your best iro and buba, add accessories and show off,” he said.

From Diran’s “To You From” photo series Credit: Hey Diran

From the optimism that followed independence from Britain in 1960, through a devastating civil war and subsequent military coups, the period on which this project is based was seismic and formative for Nigeria. This was reflected in the cultural landscape of the country and the ideas around the dress. While Fela Kuti incited rebellion and preached pan-Africanism, the most elegant residents of Lagos mixed local fashion with western silhouettes. This speaks to today’s Nigerian image makers, who draw on the past to comment on neocolonialism and redefine black beauty as Lakin Ogunbanwo, Ruth Ossai and Diran.

From Diran’s series “To You From” Credit: Hey Diran

See also  Interview with Jean-Philippe Grange, President of the Australian Embassy
Diran originally studied business and worked in event production before finding his calling as a photographer a decade ago. He learned the skill and has perfected a minimalist yet warm aesthetic, citing renowned West African photographers. J.D. Okhai OjeikereMalick Sidibé and Seydou Keïta as influences “These legends represent the excellence of their culture. I am inspired by the stage designs, style and conceptual postures of their portraits.”

From Diran’s series “To You From” Credit: Hey Diran

Ojeikere’s famous archive documenting the intricate hairstyles and hats of Nigerian women is echoed not only in “A Ti De”, but in Diran’s ongoing series “Gele”, which captures royal matriarchs in opulent settings with ribbons for The elaborately tied heads act as their crowns. “I started the series in 2017 as a way to interpret the symbolic meaning of gels and express the splendor of African women,” he said.

Diran’s fashion and art photos have appeared in both Vogue Italia and Afropunk, and his work was featured in an exhibition at the United Nations in 2018. This year, his photo “Makub”, featuring the delicate face and hands of a woman in a pastel pink infinite expansion, won a LensCulture Exposure award. “‘Maktub’ is an Arabic word that means ‘it is written.’ It is the idea that our destinies are ordered in advance but must still be pursued,” he said.

Since its debut in March on the global African media platform NataalDiran has received many responses to “To You From” and its nostalgic appeal. “The response has been overwhelmingly positive from Nigerians at home and throughout the diaspora,” he said.

“People have expressed a sense of pride, inspiration and empowerment that the project has given them.” This ties in with Diran’s broader sense of duty to create images that speak from a positive pan-African perspective.

See also  Twenty years ago, France defeated Australia in the final on the other side of the world

“I want to continue transmitting the essence of African or black ideologies while I break down the misinterpreted narratives of these cultures,” he said. “I want to be part of the global force that illuminates culture from a diasporic perspective. And most importantly, counting the many truths that are overlooked and often silenced. I feel it is our collective responsibility as African photographers to do so. ”