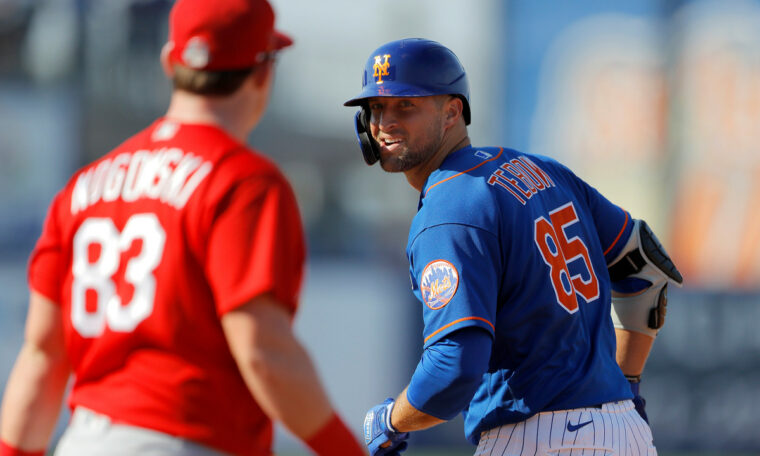 You ask, we answer. The Post is answering readers’ questions about New York’s biggest professional sports teams and having our rhythm writers answer them in a series of regularly published mailbags. In today’s installment: the Mets.

After the minor league layoffs, what does the future hold for Tim Tebow? Will the Mets continue to waste a spot on Tebow’s roster? – @ Sec309sBack

The likelihood of a minor league season not happening leads us to the possibility that Tebow played his last game in the Mets’ organization. Unless MLB institutes a rule change, given the unprecedented nature of this season, the Mets will have to decide this offseason whether to add Tebow to the 40-player roster or expose him to the Rule 5 draft.

The Mets, as a team that constantly sells the idea that it is in “win now” mode, would be hard to find a proper defense of Tebow’s inclusion on the 40-player roster. The question is, could another organization grab Tebow, who turns 33 this summer, and put him on his MLB list?

Considering there are two franchises in Florida, where Tebow is still deified after winning a Heisman Trophy with the Gators, and both teams are desperate to pay customers, he likely can’t rule out the Marlins or Rays. The Marlins, as a team that is still unlikely to compete next year in the heavily charged East of the National League, would probably be better positioned to make a turn with Tebow than the Rays.

If Tebow was not claimed, he could return to the Mets, but at what point does the life of the minor leagues age for him?

Can this team under current ownership compete for a championship in the next five years? – @captaincookbook

In the last five years they have competed for a championship, so I suppose it is possible. But smoke signs rising above Citi Field also indicate that the Mets’ owning group, led by Fred Wilpon and Saul Katz, is under financial pressure, only exacerbated by the game’s closure. If the Wilpons keep the Mets past this season (the team is for sale), I’d imagine any possible championship run fueled more by Pete Alonso, Jeff McNeil and Jacob deGrom than any bold move with the payroll. The Mets also have little chance at the higher levels of the minor leagues, which increases the level of difficulty to win.

Does this year make the Marcus Stroman swap look even worse for Brodie Van Wagenen? – @AlexanderGoHamm

Van Wagenen is only to blame here if you hated Stroman’s trade last year when it happened. In the deal, the Mets sent Anthony Kay and Simeon Woods-Richardson to the Blue Jays, committing an already slim pitching crop. Even if you didn’t like the trade, then it would be wise to wait to crush Van Wagenen – if this season begins and Stroman helps lead the Mets to the postseason or (gasp) for a World Series title, the trade will have paid a Great dividend. The Dodgers were big at Mookie Betts over the winter and could feel even more victimized than the Mets if they don’t play a season.

Will the Mets ever be considered for a UK series? – @davrosflatlee

The Mets were considered for a series against the London Nationals this season. Ultimately, the MLB selected the Cubs-Cardinals, which was canceled after the COVID-19 outbreak. The Mets’ scheduled three-game series in Puerto Rico against the Marlins that MLB sponsored was also canceled.

MLB has to finalize a potential schedule for this year before worrying about 2021, but it would make sense for the Cubs-Cardinals to go through the pond next season if the UK games continue (the Yankees and Red Sox played in London this year. past). But there is also a good chance that teams may not feel like traveling internationally, even next year, due to the coronavirus.

When are the Mets going to enter their first “real” All-Star, Ron Hunt, in their Hall of Fame? – Ray Boivie

Hunt was a very good player for the Mets, with two All-Star picks in his four years with the club. But he also played for some terrible Mets teams in the 1960s, and his lack of longevity with the club works against him (unlike Keith Hernández and Gary Carter, whose relatively short stints with the Mets included a World Series). Edgardo Alfonzo, Ron Darling and Jon Matlack were scheduled to enter the Mets Hall of Fame this season. That ceremony is postponed indefinitely. Bobby Valentine and Al Leiter, in addition to eventual slam dunk David Wright, would be good future additions.