Home Top News As trains resume, migrant workers line up with tickets and nothing else 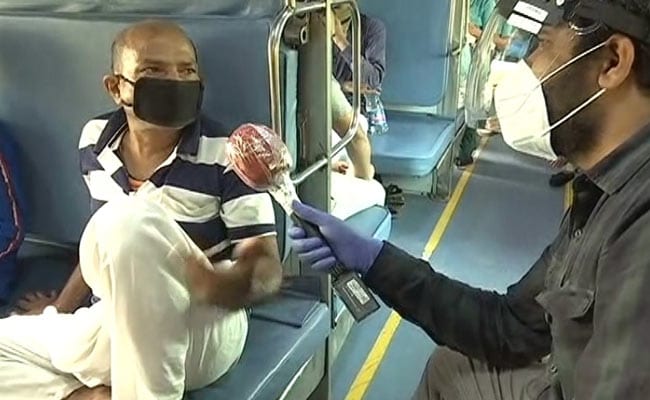 Migrant workers on the trains said they have been out of work for three months.

As limited train services resumed on Monday, many migrant workers were among the first to stand in line and face the risk of COVID-19 infection with little more than tickets purchased with money borrowed from friends and neighbors.

Out of work since March, many do not have a single rupee in their pockets. They said they were forced to borrow money and buy tickets because they couldn’t find seats on the special Shramik (Worker) trains that the government started operating last month.

“I was working as a day laborer. I will return to Bihar as I have been out of work for almost three months. I have no money left. Tickets cost 8,100. I borrowed it from a neighbor. I don’t know when I can return it,” Aryan Kumar told NDTV.

Her father Umesh Mehto said: “I also worked as a worker. There is no work here (in Delhi). We have been doing nothing for three months. We have no money.”

Others spoke of leaving Delhi due to increasing cases of coronavirus.

“I am going to Patna to leave my family. There is too much risk in Delhi,” said Najmuddin Noor. Train travel has changed significantly in the post-coronavirus world, he said.

“You will not get sheets or blankets even in the Rajdhani Express. There is no food. You can only get water, tea and cookies and even that is paid for. You have to go through the scan at the station,” he said.

Lakhs of the poor in India, including migrant workers, were severely affected by the blockade announced abruptly two months after the coronavirus pandemic hit India, with many cities losing their jobs, starving and struggling to return to their home villages.

Some have walked or biked long distances home in the harsh summer heat, with dozens dying from exhaustion or accidents.

Last month, after disturbing images of pregnant women and exhausted children walking on the country’s roads increased public pressure, the central government agreed to operate special trains and allow buses to transport them.

But special trains have often been delayed, leaving migrants waiting either on trains in hot, hot weather for days, or diverted to other stations. There have also been allegations of food and water shortages on travel.